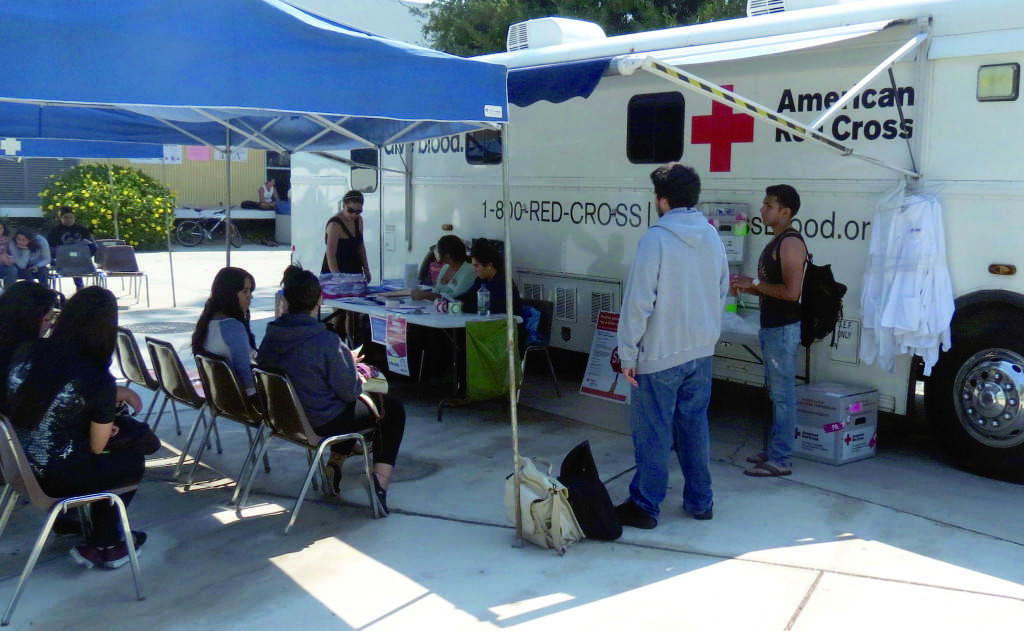 On Monday, the American Red Cross conducted a blood drive arrived at Cerritos College, prompting potential donors eager to help save lives to queue outside the truck parked in Falcon Square.

A majority of contributors were seasoned blood givers and were happy to donate their blood multiple times.

Laura Hurtado, a homemaker who had been donating her blood for 15 years, gladly accompanied her daughter when she heard that the blood drive was on campus.

“I donate every chance I get,” Hurtado said. “My blood type is the most common and it helps preemies.”

Kevin Orellana, a liberal arts major, had donated blood three times over the last four years. “I like the idea of saving a life,” Orellana said. “I’ve received blood myself, so I know the impact a simple donation can make.”

Other givers had personal reasons for donating. Meghan Gonzalez, a biology major, has a six year old sister with stage 4 cancer in her liver.

“My sister needs blood transfusions all the time, so my entire family donates blood,” Gonzalez said. “I know the blood doesn’t go directly to my sister, but I feel better afterwards because I feel like I really helped somebody.”

Likewise, Ibet Garcia, an aspiring elementary school teacher, started donating blood a year ago and enjoyed hearing how many lives she saved. However, she also donates blood in memory of her uncle.

“I had an uncle who would always need blood and have his blood washed, so that’s why I donate,” Garcia said. “I mean, I know he’s not here anymore, but it’s still nice.”

Jorge Folgar, a 23 year old theater major, likes to give blood often. “I have (type) O blood, so it can be used for anyone. I can help basically anybody,” he said.

Donating as much as a double pint every four months since the age of 18, Folgar qualifies as a dedicated helper.

“The need is always there, so if I’m not donating with the Red Cross, I’ll be donating with Kaiser. Basically anywhere that’s close,” Folgar said.

The blood drive will remain in Falcon Square until Sept. 12.