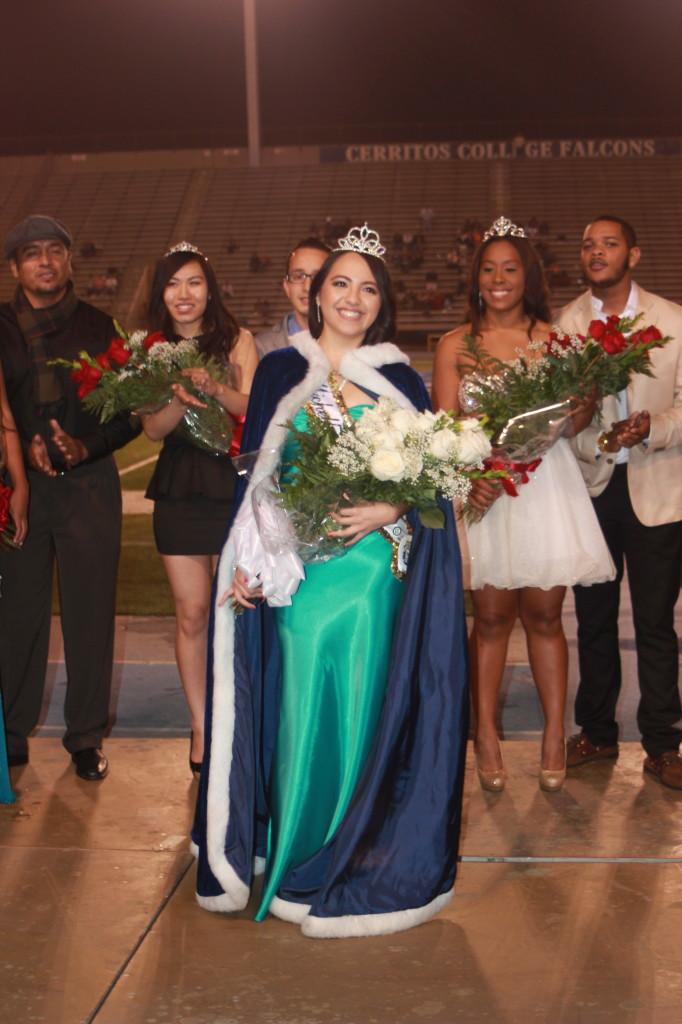 “Now that I’m homecoming queen, I know that I have a responsibility to show up at every event that I’m supposed to go to,” Mancilla said, “and I’m going to represent Cerritos College in a positive way.”

Mancilla gave credit to her friends and iFalcon who helped her campaign. She said, “I owe it all to them.”

Erienne Czernik, her supporter, stood up and cheered when Mancilla was announced homecoming queen.

Czernik agreed that she helped Mancilla a lot, but said, “She did most of the work because she needed to get her face out there.”

Lauren Didio admitted that the experience was stressful, but very wonderful at the same time.

“Just to get on the court was kind of miraculous. I wasn’t expecting that, so to be able stand up there with all these great (women), it’s been amazing,” Didio said.

During the voting of the previous days, the women found the campaigning to be time consuming and definitely put some of them out of their comfort zone.

The campaigning was a learning experience as the nominees faced roadblocks from their peers.

“It’s kind of hard to get them to vote, because some don’t have an ID,” Jasmine Paiz said, “and some you don’t know, so you have to be very genuine when asking them to vote.”

Stacy Sandoval never imagined herself running for homecoming, but she was glad that she did it.

“The best part was dressing up and feeling like a princess in front of everybody,” Sandoval said.

The 2012 homecoming queen, MarJona Smith-Holieway said, “Giving my roses to the next girl, it was a great feeling to pass (them) down.”

When the homecoming halftime was over, Kryxiane Ramos was ready to move on to the next event.

“I’m relieved that it’s over and I can go party now,” Ramos said.