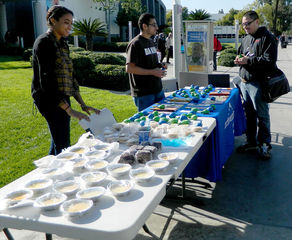 To promote Stress Less Awareness week, the Active Minds Club held a bake sale on the library sidewalk on Wednesday afternoon and will be holding it again Thursday .

Cookies, flan and cakes were sold from prices ranging from 50 cents to a dollar in order to raise funds for future club events.

Free stress balls and mental health information pamphlets were also given to students as well.

Perris Edwards, a psychology major and club historian, took part in the event and helped with promoting the bake sale to students walking by.

She says that the goal of the Stress Less Awareness was to promote ways for college students to manage stress that comes from everyday stress and from the upcoming finals. She hopes to work with mental health patients in the future.

“We have meetings every first and third Thursday of every month so we pretty much come up with ideas,” Edwards said.

She also said the club also hosts other mental health activities throughout the school year, one of which includes Stomp Out Stigma, an event where students can stomp out balloons that represent stigmas associated with mental health issues like bulimia, stress, and depression.

Edwards encourages student to not let stress overwhelm them. “It’s all about time management most of the time. So you (have) to prioritize what’s most important to least important. Make sure you have everything in order and write it down.”

Adrian Gomez, a psychology major and Active Minds liason officer, also helped with the bake sale. “I was aware of Active Minds a couple semesters ago. The whole aspect of it is what really drew me into it and made me more aware of it,” he said.

Gomez said he enjoys raising awareness for mental illness on campus and hopes that other of his fellow students get the information to not be scared of mental illness and to seek help if they think they need to.

Edgar Soto, a journalism major, was drawn by the bake sale display and asked some questions relating to mental illness. He says the upcoming finals are stressing him out.

“It’s common sense and pretty much routine so we have to find ways to relieve stress.”