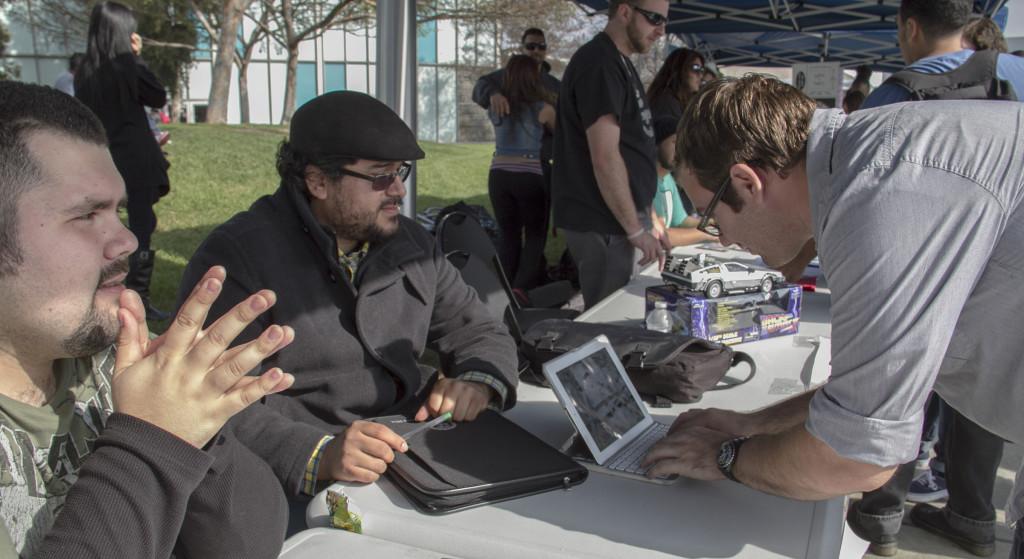 Ryan Morris (right), Anthropology major and president, also signed up for the Sci-Fi Club while getting the lowdown on the clubs activities from German Sanchez, psychology major, and president of the group. Anime Club's Manuel Delgadillo (left), history major, took taking a breather as he waited for the next group of intersted students to pass his table during the first session of Club Info Day on Jan. 28.Photo credit: Joe Zermeno

First-time roaming through the booths at Club Info Day was Amanda Cary, Linguistics major, who was caught up in the moment of the array of different clubs that Cerritos College had to offer.

“It was pretty interesting to see like unique clubs we have here, it’s a pretty diverse club range. I thought they were gonna be like pushing it on you but they really were just informing you about the clubs, they’re giving you more information than anything”

Club Info Day is an event here at Cerritos College that allows a variety of different clubs and their members to showcase their respective clubs to students, that took place first on Tuesday from 10 a.m. to 1 p.m. and again from 5:30 p.m. to 7 p.m.

The surging music from a disc jockey kicked off day one of Club Info Day, hordes of students flooded Falcon Square.

Hoping to attract as many people as possible, some clubs have strategically placed balloons around their booths, others displayed an assortment of pictures and some simply displayed posters to attract and inform potential recruits.

Annalissa Chavez, vice president of Alpha Omega, was delighted by the turnout of students wandering through the different booths and more than happy to advertise what Alpha Omega was all about.

Adrian Gomez, psychology major, a member of Psychology Club was also satisfied by the number of students interested in joining the clubs specifically psychology club.

“The turnout is like really really great, it looks like we have a lot of interested new members. Come and join us, we’re all kicking it, enjoying each other’s company.”

Other students seemingly had a few clubs in mind to check out and did not want to bother with exploring other club booths.

Lupita Infante, music major, merely wanted to explore the specific clubs she was interested in joining and not the other club booths.

“I’m in the music program, so I went really to check out the Music Club”

Clubs will reconvene on Wednesday to give more information out to students from 10 a.m. to 1 p.m.

For more information about clubs and what events they may have the clubs will meet for the Inter-Club-Council meeting on Thursday at 11 a.m. in room BK 111 and BK 112.