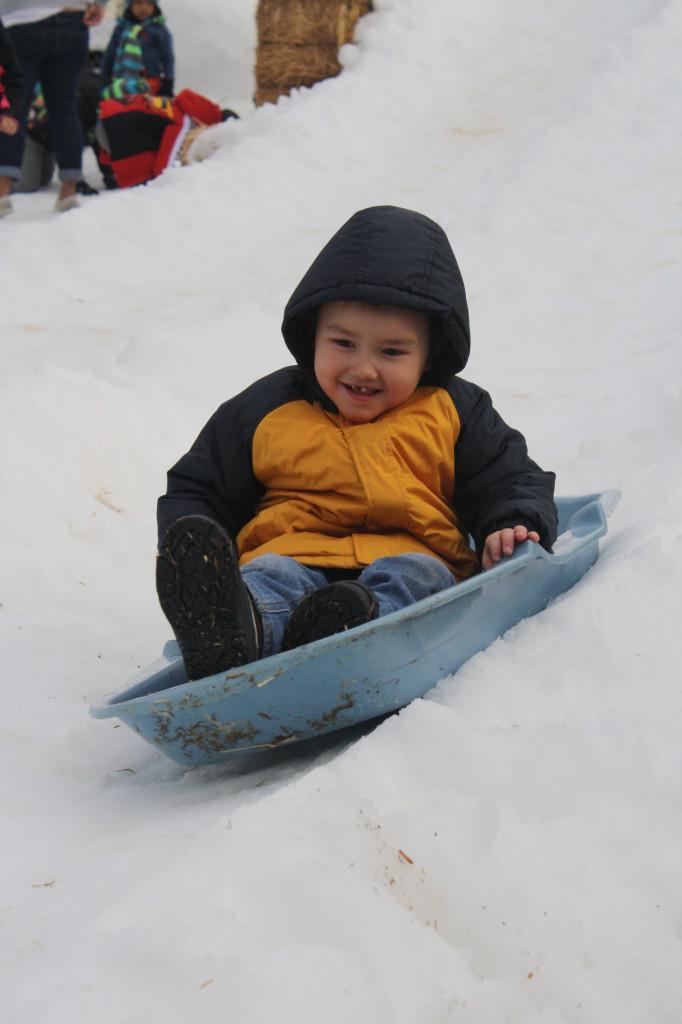 Four year-old Joshua Weir sliding down the snow slide at the “Snowy Day” event last Friday. He said he had fun participating in all the activities.Photo credit: Sebastian Echeverry

It was indeed a “snowy” day on campus, or at least it was at the Child Development Center on Friday Jan. 31.

Carmina Weir, mother of four year-old Joshua Weir, enjoyed the social aspect of the “Snowy Day” event, hosted by the Child Development Center, as the event had dancing, performances and recreation for all the children at the annual event.

“It’s so much fun, because he is socializing with the other kids. They learn how to play together instead of fighting.”

“Snowy Day,” as the name implies, had snow for all the kids at the Child Development Center, as workers prior to the event had the play-center decorated for the festivities.

Debra Ward, Director of the Child Development Center, said the annual event all started four years ago, when the program wanted the children to have some sort of Christmas and winter annotated event.

Now, the event has members of the program and family members participating and assisting where it is needed.

“We are funded by three grants from the state. The process works by having a committee of parents and staff. They have worked together for the past two months to put this all together.

“We contacted the company called “The Ice Man,” which comes out and brings the snow. Then the staff and parents provide the food and organize the activities.”

The event had a snow slide, where kids and parents alike gathered around and took turns going down the ramp.

Carmina noted the kids were visibly engaged and involved in all that the activities the event had to offer, including her son, Joshua, who was enjoying his time in the snow.

“It’s good. I like the inner tubes,” Joshua said, as he described his favorite part of the event, which was interacting with the other children on the playground.

Along with the snow slide, “Snowy Day” had ice fishing, painting, a choreographed dance from the children and a magic show lead by Melissa Bueno, a Liberal Studies major.

Dubbing herself “Bueno the Magnificent,” Bueno interacted with the kids, along with her assistant Emma Ramirez, an arts and education major.

“I’m actually very shy in front of people,” Bueno said. “I get stage fright, so when I was up there, I did it for the kids to see them smile. I’m not a magician, but I did whatever I could to make them happy. It was nerve wrecking, but it was worth it.”

Ramirez, called “Batgirl” for the show, as she was dressed in the character’s clothing, and Bueno performed magic tricks, such as the “Head Twister,” which involved applying separate boxes to her assistant’s head and spinning them, giving the illusion that her head was rotating a complete 180 degrees.

The magic show culminated with Ramirez changing clothes behind a cloth, swapping off her Dark Knight apparel in favor of the character Elsa’s clothing from the movie “Frozen.”

Joshua said he enjoyed the magic show and was elated that the show had “Elsa, too.”

Building off of the “Frozen” conclusion of the magic show, Ramirez then performed with the other children in a dance with music from the respective movie.

Along with the events that the Child Development Center churns out, Carmina also enjoys the program as a whole, and what it offers.

Ramirez enjoyed the patient manner in which the center caters to its children.

“They do a lot of activities for the kids here. They have stations that they work in. If my kid is interested in building shuttles, then they will teach him how to build a shuttle.

“They will start from scratch and slowly start building and put together a little shuttle. They focus on whatever the child wants.”

The event was a success, according to Bueno, and it will indeed be returning again for the following year.

“I think that it’s magnificent. It’s awesome. There are smiles everywhere, so that’s a good thing.”