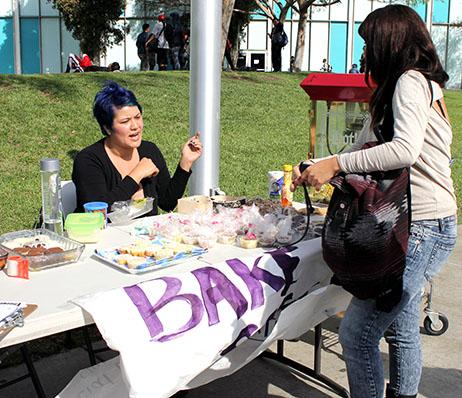 The Social Equality Club braved strange weather and bitter cold, as it held a donation-based bake sale on Wednesday, Feb. 5 to raise funds for the club and future events it would like to host in the future.

Fernanda Gudino, nursing major, has been a member of the Social Equality Club since last semester.

She helped out during the bake sale and said that she joined the Social Equality Club because it was interesting for her.

“It has to deal with society, things we go through every day and life experiences,” she said.

She says the club has helped her learn things like how to be outspoken on issues that she feels strongly about.

Gudino encourages others to take part in the club and be active in them.

Jennifer Ovalle, co-founder and president of the Social Equality Club, was also present at the bake sale.

She says the goal of the bake sale was to raise money to support the club and events that they would like to hold in the future.

“Since we’re new we don’t have any funds,” Ovalle said. “We’re donation based. So whatever people want to give us or think we deserve, it’s cool.”

The mission of the club, according to Ovalle, is to “make students aware and educate them about the social justice issues that we face within our communities.” Ovalle says that they would like to help students collectively solve issues within campus and the community.

“We should donate and join the clubs,” he said.

Ovalle says the first event for the Social Equality Club will be on Monday, March 3. It will be an AB955 panel that will discuss the new college tier system that was started in Santa Monica College and which was signed by Governor Jerry Brown last year.

“(The panel) will pretty much be explaining to students the new law, as of 2014. The new law, AB955, pretty much entails the beginning of a two-tier system in community colleges.”

Ovalle says that the panel will be a discussion on the new law and how it will affect students at Cerritos College.