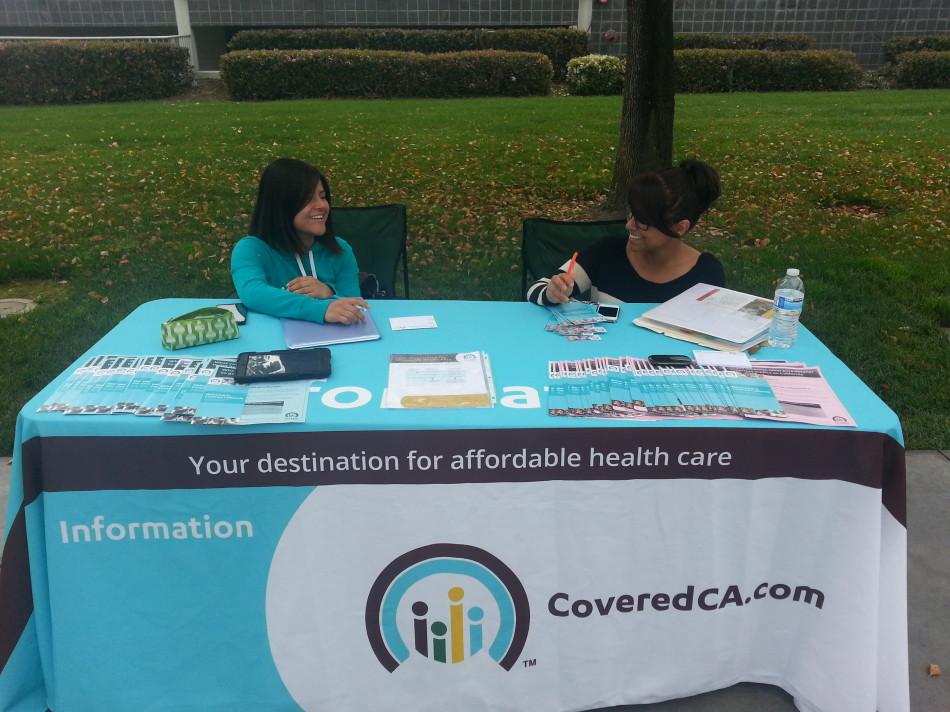 (From left to right) Martha Rodriguez, psychology major, works with Ariday Avellaneda, nursing major, to promote health insurance information to students at Cerritos College. Rodriguez and Avellaneda were hired by USC, which is working with Project HOPE, to spread the word on health insurance. Photo credit: Alexandra Scoville

An organization by the name Young Invincibles teamed up with the Adult Education Department at Cerritos College to provide health care insurance information to students as well as community members.

Maria Beltran, California outreach coordinator for Young Invincibles, was in charge of the event and planned along with the Adult Education Department.

Beltran spoke at a spanish version of the workshop earlier Saturday morning from 8:30 a.m. to 10:30 a.m.

Young Invincibles has launched a campaign called Healthy Young America, where presentations take place all across the country.

Beltran feels that both workshops had good turnouts.

“People were really engaged and had great questions.”

Some of the information was geared specifically toward young adults. This fits in with Young Invincilbles’ mission of educating the young community.

Audience members were encouraged to go to coveredca.com to see if they qualify for health insurance.

When going to coveredca.com users will have to enter personal information into a calculator, such as how much money they make, where they are from and their social security number among other things.

Anderson felt that security would be an issue when entering this information online.

“The questions I had regarding security of personal information were not answered and it is those concerns that keep me from going on that calculator.”

He went on to say that he did find information about Medi-Cal to be useful to him.

If the deadline is not met then residents may have to pay a $95 fee or one percent of his or her total income.

Residents are encouraged to seek health insurance soon because the fee will only increase over the years to come.

To educate students on the deadline and other health insurance information was nursing major, Ariday Avellaneda and psychology major, Martha Rodriguez who have been hired by USC to promote Covered California.

USC has worked with Project HOPE at Cerritos College to train and hire students to do outreach for Covered California.

Avellaneda and Rodriguez said that they have been working together since January but say it’s getting more important as the deadline approaches.

“It’s usually not to bad to manage, but I feel like you have to be responsible and prioritize school over work, but we get through it,” Avellaneda said.