Quantity of parking machines not enough for students 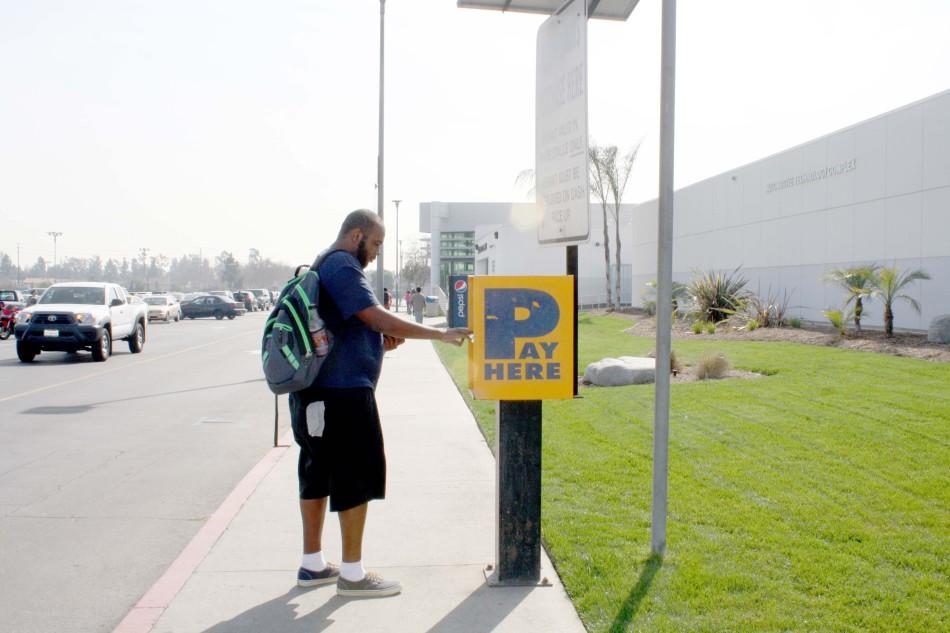 Damani Williams, a computer science major, paying his one-day parking permit at the Cerritos College parking lot by the Automative Technology Complex building. He is one of many students who believes that there should be more parking machines as the seven machines available are not enough. Photo credit: Amairani Mendez

The amount of parking machines throughout Cerritos College has been inconvenient for students like Damani Williams, computer science major, with the seven machines in the parking lot said to not be enough.

Williams said he feels that there should be at least two parking machines in each aisle on campus. However, he said that the price of $2 is still reasonable.

Tom Gallivan, Captain of the Cerritos College Police Department said that the parking machines are about 13-years-old. As of now he is not aware of any future plans on getting new one-day parking machines.

He knows that students tend to make a big line to pay parking permits and that causes them to be late for classes, but he thinks that there is something students can do to fix this issue.

“It’s more economic to get a pass. That would eliminate a long line if students purchase a parking permit before the semester starts. It would be cheaper in the long run.”

If students don’t buy a semester pass or pay for a daily pass, then they may receive a ticket worth $40.

Daniel Padron, administration of justice major, believes that parking should be free, as it can be a struggle for students with financial problems.

“Why are they charging us to park in a publicly funded place? Even after Prop 30 was approved,” Padron said.

Associated Students of Cerritos College vice president, Aldemar Sanchez, thinks that it would benefit students if Cerritos College received more parking machines, as the problem of students arriving late to class would be reduced.

He said that getting new machines may take a while, so a temporary solution would be to have passes that cross over throughout semesters.

He went on to say that it may also be beneficial to change the price of daily passes from $2 to $1.

This would require Sanchez to work with Student Government and Facilities, which would take time, but he hopes to have this worked out by the next Fall semester.

Parking permits could be purchased on the MyCerritos website. In addition, it can be bought in person at Campus Police and at the Admissions and Records office.