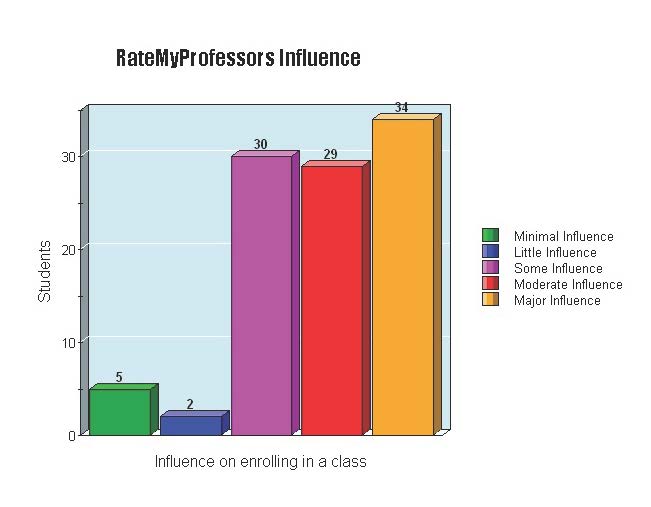 Aside from looking at who has more chili peppers on RateMyProfessors, students navigate through the website to determine what professor is an ideal fit.

Out of 100 students on campus, a combined 63 of them said the website had a profound influence on whether or not they chose to enroll in a professors’ class.

“It’s a pretty helpful tool. I use that site to help me choose my teachers,” Bridgette Erickson, nursing major, said.

This site allows students to rate their professors based on their helpfulness and clarity, then averages the overall quality as a professor.

Janet Danielo, an English professor, said she understood why students used it but also saw the faults in its nature.

“The website for students is like Yelp for the consumers,” Danielo said. “If there are bad reviews at a restaurant, I don’t go to eat there. Even though logically, I know that there are many people that go to that restaurant and they just don’t leave a review. Usually people leave reviews when they are angry.”

“I looked up my economics professor and it said she was a bad teacher, when in reality she was great. So I think it’s useless and not really accurate.”

Both students and professors agreed that the best tactic for choosing a professor is by word of mouth. This way, students are able to listen to the opinion of someone they trust and bypass the inaccurate depictions of professors.

Though this website is an outlet for students to give feedback on a professor, Danielo said students should keep in mind that professors are human and have feelings, too.

On the other hand, if students take the time to write constructive criticism, professors are more likely to take into account their opinions.

When professors are first starting, the curiosity about their performance leads them to check their reviews, according to Jaclyn Ronquillo, a psychology professor.

Alex Vega, psychology major, said, “If the professor is confident in the way he teaches, then I don’t think he cares. But, for professors who are looking to improve, then maybe they might find it useful to look at it.”