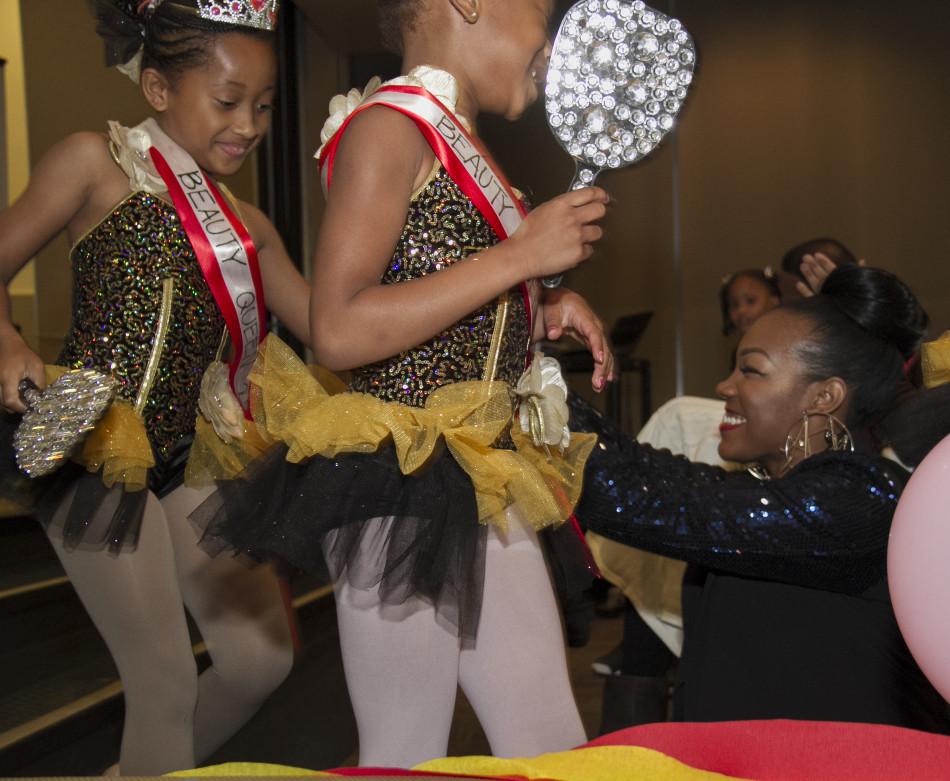 Taliyah Manu and Myshielle Walker, two of the "The Sparkle Girls," come off the stage to the praise of Shiquita Sargent, their dance instructor from Gravity Dance Company. Photo credit: Joe Zermeno

Promoted as “Sunday Best”, the college community enjoyed an evening mix of praise, evangelism, the spoken-word of gospel, a fashion show and dynamic talent show by a rousing dance troupe of talented youngsters celebrating their art through the expression of dance.

A mixed gathering of 50 parents, grandparents, family members, students and supporters, of the Cerritos College Black Student Union heralded the annual observance in the Student Center, which concluded on the final day of Black History Month, on Friday, Feb. 28.

Board member Bob Arthur said, “The event at Cerritos was the start of the awards season for spring semester and (he) was proud to be there to support the BSU.”

The main stage in the Student Center graced the talents of a dance troupe of children from Long Beach based Gravity Dance Company created by Shiquita Sargent. They utilized any combination of dance techniques and eclecticisms that brought dance movement into harmony with other forms of African-American musical expression throughout the evening.

The mellifluent performances by the children from the dance and performing troupe were a testament to its founder and artistic director. Sargent, who herself is Falcon royalty and no stranger to its audiences, was on the 2005 Homecoming court, a former cheerleader and song leader before starting her own dance studio.

“They have raw and natural talent and work really hard at (dance). I’ve had them since they were two and three-years-old,” Sargent said. “I was blown away and in awe to see them express themselves so eloquently and being so young.

“As a dancer your language matures as your technique does, as your age and experience does. When you see these toddlers, who aren’t even in school yet, (being) able to articulate what a grown up does is amazing. It’s a God given gift. They inspire me,” Sargent said. “How real and sincere they are.”

After initially opening the show, “The Sparkle Girls,” Sanaa Musaadiq, Myshielle Walker and Taliyah Manu, second performance gave another dance rendition for the talent show. Each evocative performance was a vibrant reflection of spiritualism reminiscent of Lester Horton, Katherine Dunham and Ailey’s’ influences.

“At eight and nine-year-olds, they have so much personality for being so young. With personalities of teenagers, minus all the attitude and disrespect, they work hard; they love performing.”

“I was so impressed, so captivated by their performance. “They are the light of my life and are sponges of everything I (teach) them,” Sargent said.

“Her piece was contemporary lyrical. It’s a genre of dance that fuses ballet, modern, and jazz techniques. It doesn’t have any rules. (At 15) Jasmine sees she has this artistry she wants to express and does her best to let (the audience) see what it is she has,” Sargent said. “She’s never done a solo. For her to (perform) at (the event) was a pretty big deal as her first time.”

Another Musaadiq sibling, Bilal, a third grade student, did a hip-hop dance rendition. “He’s in football and all kinds of ‘boy stuff,’ so he doesn’t take dancing as actively as his (two sisters’) do. At nine year’s old, he’s self taught. I can’t even take credit for that. It’s all him. A very talented family.”

To keep in theme with the Black History program, the only young adult dancer was Shabron Easter. “He is amazingly talented. With the build of a football lineman, he is so light on his toes and a beautiful (performer); takes instruction impeccably,” Sargent said. “He’s been dancing for two or three years and only since high school. He works his tail off.”

Easter, a dance and aerospace major at Long Beach City College, created an improvisational dance to a song by Luther Vandross. As he performed his solo interpretation, a vocificerous empassioned audience exclaimed ‘Go Luther, go Luther’ from their seats while he glided across the Student Center stage. “Their motivation helped me to go forward and do more and keep going,” Easter said.

The combined stage presence of the Gravity Dance Company’s performing dance troupe facilitated the platform for which these gifted aspiring artists could share their creative work. “They are the future of dance, the emerging artists,” Sargent said.

The fashion show participants were all from the dance troupe along with the BSU President Josh Mazyck and Vice president Tyrece Britton.

Veronica Castro, scholarship coordinator from Financial Aid, was the facilitator for the fashion show portion of the program.

“This is my fourth year as emcee for this part of the event,“ she said. “Seeing the kids (perform) on the catwalk is so much fun. I love it.”

What followed was a riveting Evangelistic spoken-word testament by Barbara Young, of C. Edward Young Ministries, which stirred the audience to reverberate affecting responses of “hallelujah” to praise Jesus. Young demonstrated her ardent enthusiasm to the community and BSU audience through her slow-paced stroll across the stage as she preached these beliefs.

Young first introduced her crusading zeal in a short video presentation documenting her trips to several African nations including Ghana, Uganda and the United States, where she ministered the word of God and fed the poor.

The troupes’ “Sparkle Girls” took the first place award for the many dance performances throughout the evening.

Sharon Plump, facilities employee, gave a powerful gospel soliloquy as she preached to the substitute Cerritos congregation. The African-American community has a strong tradition of enthusiastic and vibrant spoken-word gospel ministry praising the Lord and asking the audience to rejoice.

Prior to the presentation of the talent show winners, certificates of appreciation were given to the speakers and staff who had helped in producing the annual event.

“If your children weren’t (performing), it wouldn’t have been much of a show. Thank God you were here. Blessings to you,” Hunter told Sargent. “Your group really carried the show,”

The City of Norwalk officially proclaimed February as Black History Month to recognize and commemorate the countless contributions to history and culture achieved nationwide by the people of African-American heritage. Hunter, Mazyck and Britton accepted the proclamation on behalf of Cerritos College on Feb. 4. at the city council meeting.

“BSU wanted to show its appreciation for the month, whose precursor was started on Feb. 26, 1926 by American historian Carter G. Woodson and the Association of Negro Life and History for a week in February,” Mazyck said.

A South Carolinian, he’s been in Southern California for three years and has attended Cerritos for two. Mazyck, a web designer and computer science major, said “It’s important to celebrate our people’s history. Let’s be honest, African-American’s make up 14 percent of the U.S. population.”

In 1976, Negro History Week was expanded to African-American History Month and officially recognized by the U.S. government by President Gerald R. Ford. He issued the first Message on the Observance of Black History Month that year.

In 1986, Congress officially made it National Black History Month. President Ronald Reagan proclaimed the foremost importantance of the month was that all Americans be aware of this struggle for freedom and equal opportunity by African-Americans and “to celebrate the many achievements of African Americans in every field from science and the arts to politics and religion.”

He told Americans to “seize the opportunity to honor the too-often neglected accomplishments of black Americans in every area of endeavor throughout our history.”