‘Unbought and Unbossed’ opens eyes to women in politics 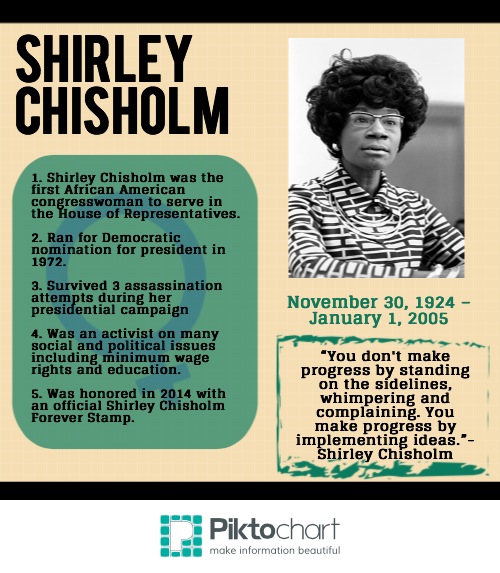 Latosha Davis, a child development major, had only briefly heard about Shirley Chisholm, the first African American woman to run for president, in passing before watching the ‘Chisholm ‘72: Unbought and Unbossed’ screening on Wednesday, March 12.

“I never knew in depth how deep she was and kind of gave me chills,” she said.

“As a child [my grandma] would tell us about the importance of voting, you know, just learning about your history so that was something she instilled in us as a kid,” Latosha said.

The documentary screening in honor of National Women’s History Month, had a last minute change of room from S-201 to to the Teleconference Center.

Julie Davis, a history professor, was the instructor who presented the documentary.

Chisholm’s campaign was covered along with her journey, the obstacles she faced which included sexism, misogyny and attempted assassination attempts on her life.

Professor Davis said that this film was chosen for Women’s History Month because Chisholm was an important woman of the 20th century.

“She’s a significant figure in Women’s History, being one of many women who ran for the presidency but the most serious one of the 20th century.”

Chisholm’s journey in politics paved the way for other minorities to be taken seriously when running for political office. She was not the first woman to run for president, that title goes to Victoria Claflin Woodhull who ran against Ulysses S. Grant in 1872.

According to the Center for American Women in Politics, Chisholm “was on the ballot in 12 primaries in what was largely an educational campaign. She received 151.95 delegate votes at the Democratic National Convention.”

Professor Davis believes that women still face many obstacles in society including the political and wage disparities between men and women.

These were issues that Chisholm fought for during her political career. However, the gap between men and women representatives in politics has not closed during that time.

“I think that women are still seen in many ways as not equal to men for a variety of different reasons. I think if you took a sampling I think there’s still somewhat of an understanding that women are not quite tough enough,” Professor Davis said.

She believes society’s views on women depend on current events.

“If we’re engaged in some kind of a war or conflict or military engagement if women don’t have a tendency to support that then they can be critiqued that way.”

Latosha said that the documentary transformed the way she thought about Chisholm.

“I think she was very powerful. Her speeches were touching, she really fought for change and it made me reflect back to what my grandmother talked about.

“If you don’t speak up it won’t make a difference and nothing will change. Even if she didn’t win it was all about the change,” she said.