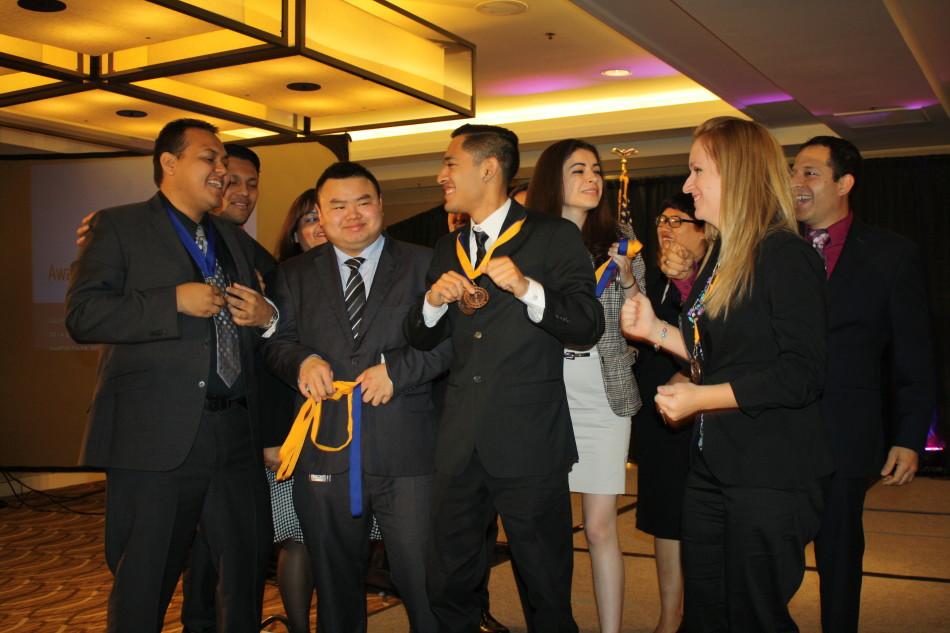 Eight students received awards for their competition at the State Business Leadership Conference this weekend, with three of them proceeding to compete at the national level in Nashville, Tennessee.

Cerritos College Phi Beta Lambda (PBL) Club members stayed up until 4:35 a.m. the night before competition, practicing for any possible scenarios that the judging panel could throw at them.

“We had to come up with all of the scenarios to how we would maintain lower the budget, keep customer loyalty, reduce theft,” Lopez said. “Our solution was self checkouts.”

Inspiration, competition, networking and awards were all part of the agenda for the students.

Olivia Rodriguez, business administration major, spoke to the keynote speaker and let her know how her speech inspired her to get out of her shell.

“I was really inspired by Ashley Stahl. Me being an introvert, I kind of have a hard time talking to people. She taught me that if I keep talking to more people, something good may happen,” Rodriguez said.

Enrique Velasquez, PBL president and business major agreed that the networking opportunities at the conference were valuable.

“We got to meet students from Cal State Fullerton, Cal State Dominguez and UC Berkeley,” Velasquez said. “That’s the networking we want to get involved with because some of our students are looking to transfer to these four-year schools, and now they can look for familiar students when they do.”

Jerry Ramos, club adviser and business professor, was extremely proud of his students and said that they shouldn’t forget to be selfless in their success.

“I want them not to just lead themselves, but to lead others. They need to remember that they belong to a greater whole,” Ramos said.

Florence Yu, PBL state president, said her main goal for the students was for them to cease limiting themselves, hence the theme “Going Straight to the Top.”

“A lot of students are scared and don’t want to go out of their comfort zone to try different things because they don’t know if they’re going to be successful, but in that same aspect, they’re the only one’s who are limiting themselves,” Phu said.

For many members it was their first time at this conference, and they overcame this challenge of limiting themselves.

Sirena Holan and Aldemar Sanchez presented in front of the judging panel for the first time and they placed second and third in their categories against schools like UC Berkeley, UCLA and USC.

“Competing was amazing. I do it in other places, but not in a business aspect, so it felt really good to get second place in impromptu speaking,” Sanchez said.

If students receive funding from ASCC, they will attend the national PBL conference in Nashville, Tennessee from June 24 to 27.