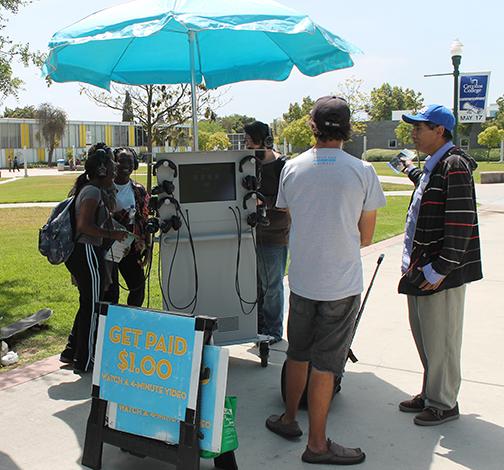 Students gather to watch a video on animal abuse in front of the Student Center. F.A.R.M. volunteers answer any questions students might have.

The television sets and headphones were set to watch four-minute videos about the treatment of farm animals. The group brought students in by giving a dollar to students who watched the video.

He added, “I always wanted to change my eating habits but I don’t really know how. And actually it’s easier to eat unhealthy. It’s easier and there’s easier access.”

Angie Fitzgerald, part of the tour, said that it was nation-wide, “We come to colleges to educate students on the realities of the meat, egg and dairy industries.”

Micheal Reeves, sociology major, also watched the video. He said he was open to the idea of reducing his meat intake but not stopping altogether. “I don’t think I can stop completely.”

Reeves added, “I think it would be really hard to stop eating meat altogether.”

“Most students are pretty shocked. A lot of them, luckily, have seen things like Food Inc.; that’s a great documentary. But that doesn’t make it any less difficult to watch this video,” Fitzgerald said.

The pamphlets handed out to students gave them further information on how reducing their meat intake can help farm animals, as well as tips on substituting red meat for chicken, turkey or fish.

For more information on F.A.R.M., students can visit its website www.farmusa.org.

For information on going vegan, students can visit opposecruelty.org.