Three years of leadership: Ramirez moves on with no regret 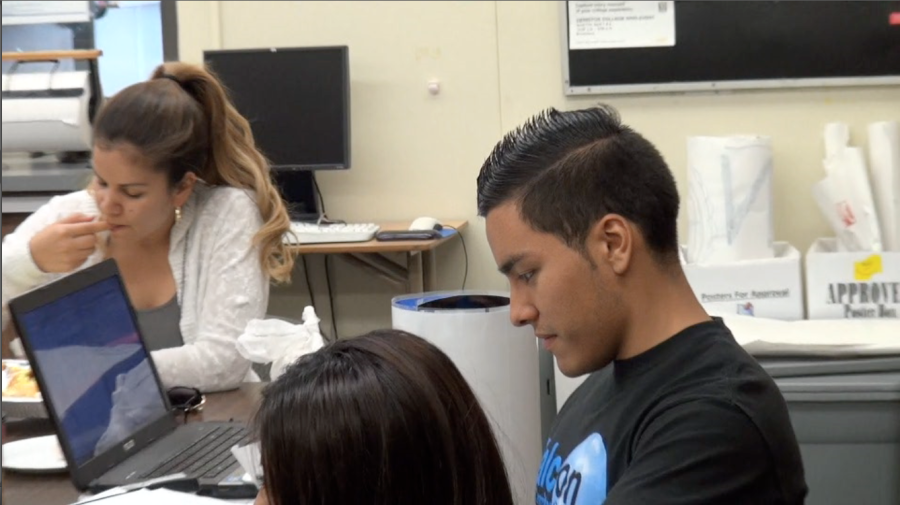 Juan Ramirez leaves behind three years of responsibility, relationships and experiences when he leaves Cerritos College and transfers to UC Davis.

Graduating Saturday and moving beyond the sanctuary that made him the leader that his colleagues paint him to be, it’s made him reflect on what he has accomplished and experienced at Cerritos College.

The current ASCC president has been instrumental to the implementation of many changes on campus. This is a result of his passion for nutrition and go-green initiatives.

“This campus means, really, the world to me, even though I’ve had some bad memories,” he said. “The students I’ve encountered have all been supportive of what I’ve done, even though we might not see eye-to-eye on certain issues.”

Ramirez will transfer to UC Davis as a nutritional science major, where it morphs into clinical nutrition. His affinity for a healthy lifestyle is what sparked his tenure as a member of student government and eventually, president.

“One of the things I really disliked was the lack of healthy food provided here.”

He had a crucial role in getting the new food vendors approved by the board of trustees. As a result, Chicago Harv’s, Frantones and Oh No Tokyo! will be replaced with new vendors, like Fresh and Natural.

“When it got approved about two months ago, it felt like this hard work wasn’t for nothing,” Ramirez said. “It provided change for the campus. Little things like that really cumulate and causes you to go back and say, ‘Wow. We accomplished so much.’”

It was over a year ago when Ramirez was elected ASCC president. He calls it a “highlight” and one of his “most memorable moments.”

This was all in the midst of a trying time in his life.

Ramirez said, “It was a very difficult time in my life, and I don’t mean this in a family situation — my family was extremely supportive — but in academics. I was so booked, and I was lacking sleep for like the last two weeks for election, but I wanted to win. I had that burning desire in me to provide change to the campus. It kept me going.”

He’ll never forget when he found out he won.

“So we were actually all hanging out at (Buffalo Wild Wings) after the last day of elections and the winner was announced that same night. I remember driving — and I’ll never forget — getting out of the parking lot and seeing AJ, she was the coordinator of student activities and the interim dean at the time, and she just told me straight-out, ‘You won.’ I had no idea what to say.”

He continued, “It was phenomenal. It felt like nirvana. I remember calling my mom and my dad and they just started crying, because they never imagined me, being the shy kid, taking that extra step to become a leader.”

Passing of the torch

Charles Caguioa, the next ASCC vice-president, teaming up with Miles Aiello, has been with Ramirez since he really first got to student government. He recalls a certain conversation.

“I remember Juan and I had this conversation on whether or not Juan was a good and successful leader … He would always sort of question whether or not he’s a great leader — and he’s a great leader — he’s an amazing leader, because he not only took care of us as part of the student government and with the students and what he promised, but he did all that and more just to make sure that it was for the betterment of the college.”

Aiello and Caguioa will follow the same pattern as Ramirez.

Caguioa said, “It’s going to follow a lot of what Juan has done here in the college, especially with the food and the sustainability on campus. He does inspire a lot of people and one of them has to be me. I was taught by a very great leader.”

Ramirez wishes he could have had more time to accomplish more things, but overall, “In the one year that I had … what we created is beautiful.”

UC Davis is what awaits the soon-to-be-former-president. What he learned as a Falcon is what he hopes to carry over as an Aggie.

“Being involved, and being in a leadership position, you realize you can help a massive amount of people if you were really to go out there and try to accomplish these tasks.

“Right now the future is open for me, but I’m excited. I’m going to tackle it the same way I tackled my presidency, with ambition, with a lot of heart and trying to make other students, or other people who are interested in this field, become leaders themselves.

“Honestly, no regrets. I love Cerritos College. I love being a Falcon. And I know that 10 years from now I’ll still feel like I’m a Falcon.”