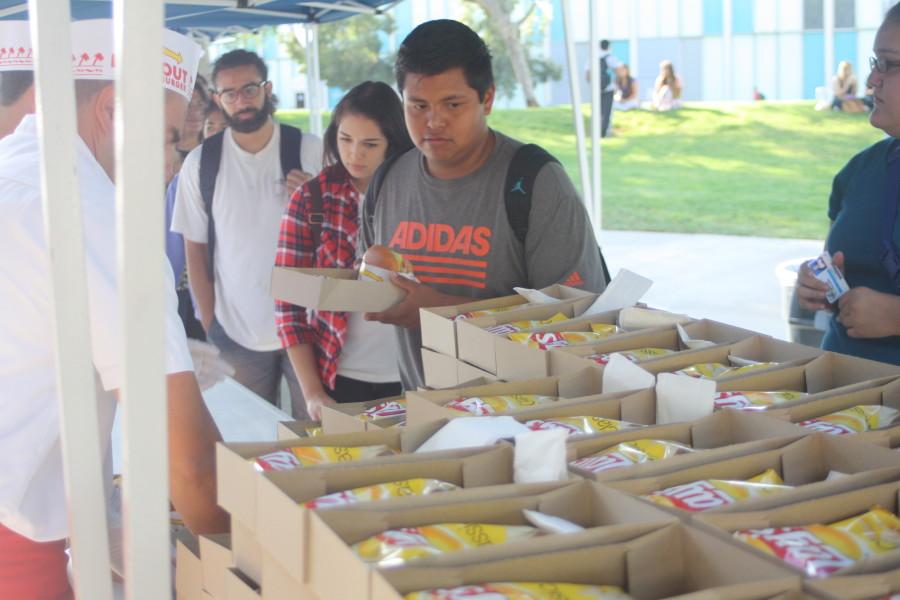 Jose Altamirano, a mechanical engineer major, decided to stop by and get a burger before class.

In-N-Out paid a visit for the second time this week Tuesday, Aug. 19 from 5:30 p.m. to 7:30 p.m., welcoming new and returning students to the campus. The ASCC once again showed support for the students and showed them “fun stuff” goes around the campus.

Alexis Luna, an aspiring chef and music major, was part of the event. “There is at least a thousand burgers (that) will be given out.”

The total number of meals given out was said to have been 700, according to Aldemar Sanchez, vice president of Phi Beta Lambda (PBL) and Queer-Straight Alliance (QSA).

Students with a valid school ID and a 2014 Fall semester sticker were able to receive at least one burger, a side of chips and water for their free meal.

Students were excited about the whole idea of In-N-Out paying a visit to campus. “In-N-Out is awesome; it’s very popular,” said Jerry Regan, who is an undecided major and a newcomer to Cerritos College. “The food is good. I like In-N-Out. I think it’ll be great to have one on campus.”

Few waited more than an hour. Royal Harrington, a criminal justice major, was the first person in line waiting for her In-N-Out meal. She claimed to have been there since 4 p.m.

Once 5:30 p.m. struck and the truck started handing out meals to the students, smiles were soon starting to show. Jazmin Gomez, a child development major, managed to get free In-N-Out for the second time in the row – after coming the first day – and made sure to give her input about the food.