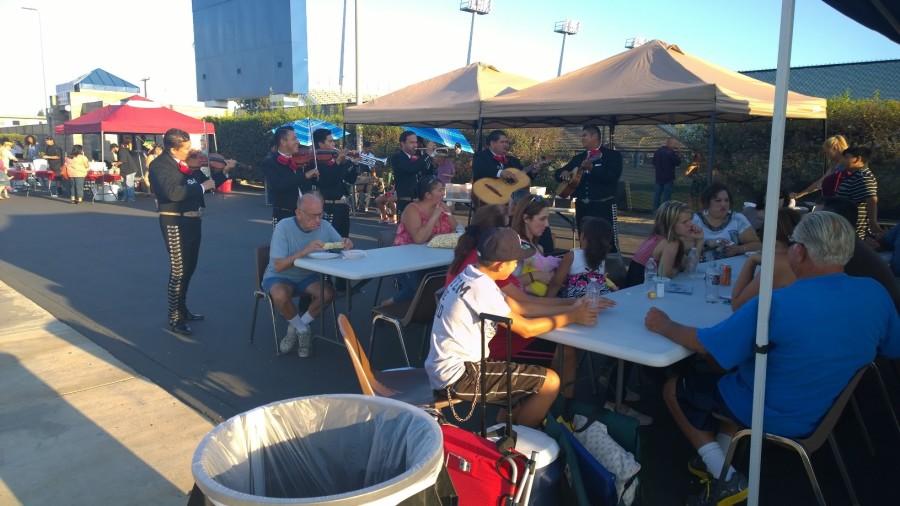 Mariachi band plays music while people eat free food in the pre football game celebration. Free tacos, corn and other items were given out to whoever came. Photo credit: Grester Celis-Acosta

Free food, such as tacos, corn and others, were given out in front of Falcon Stadium for the pre-football-game celebration on Saturday, Sept. 13.

Students, faculty and community members were in attendance and lining up to get free tacos. Not only was there free food, but there was also a mariachi band playing. Members of the Associated Students of Cerritos College had been advertising the event on campus in the past weeks through the use of flyers.

“The purpose of this event is to celebrate National Hispanic Heritage Month and to really bring awareness to the community that Cerritos College is here for the students, the faculty and the community at large,” ASCC President Miles Aiello said.

The turnout for the event was high, with as many as 300 participants.

The students in attendance were rather fond of the event. Fernando Hernandez, a nursing major, said that he liked the event and that he loved the mariachi band.

Juan Avilla, a music and business major, agreed with Hernandez and said that he was going to get more tacos after the event was over if there were any left.

About 20 members of the Sunburst Youth Academy were invited to attend this event.

According to Aiello, the group consists of students who have been doing well in school but volunteered to be a part of this program to help better themselves and accomplish things and become a better individual.

As for whether the tacos were good, Aiello said, “They were delicious; and we had free elotes (corn).”