UCLA, Berkley professors visit for Constortium on Israel and Hamas 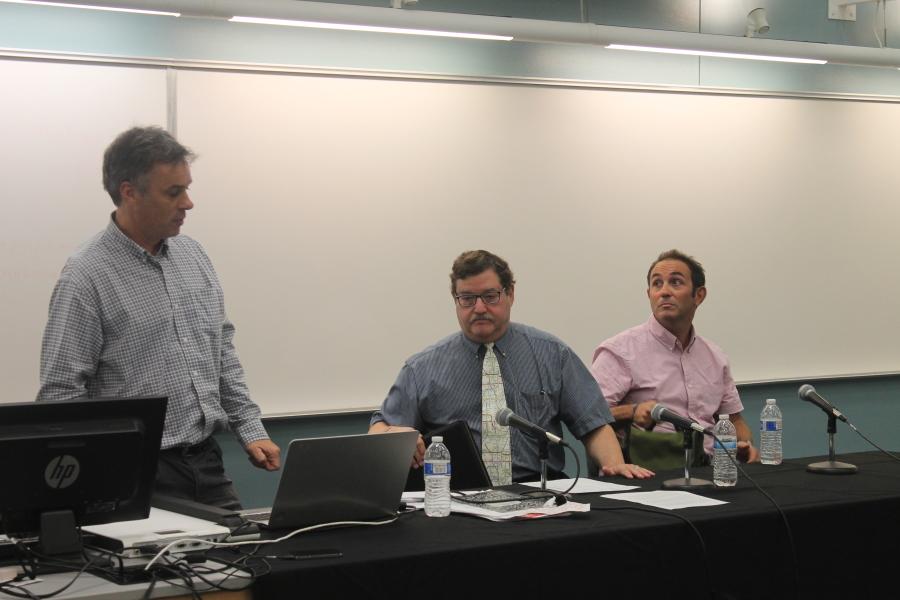 The Professors that participated in the Consortium getting ready to start the presentation in room S-201. Photo credit: Kenia Torres

Are Israel and Hamas guilty of war crimes? What is the main cause of this conflict? Who won or lost the fight?

These are all common questions that have have been asked by people around the world, but on Tuesday, Sept. 30, Cerritos College students were interested and asked these questions regarding the conflict that has been going on between Israel and Palestinians.

Most of these questions were answered by Saree Makdisi, UCLA English professor, Ilan Pappe, a history professor and human rights activist, and Rabbi Michael Lernerin.

The main topic was Israel and the causes of the conflict. After more than seven weeks of intense fighting between Israel and Hamas have agreed to an open-ended fire.

This war, however, killed more than 2000 people, who were innocent civilians, mostly Palestinians.

Israelites have authority of anything, and over anything according to Ilan Pappe.

He added, “Israel controls everything.”

Another thing mentioned was that this war is not between different countries, or states. People do not understand that Israelis are fighting against their own people.

According to UCLA’s English professor Saree Makdisi, “Israel bombing Gaza is like us bombing Compton.

“It is not a war between states, it is a war within that is internationally recognized as its own.”

Although people think this will soon be over there are no signs of ending the conflict.

According to David Luna, history major, “I loved the fact that they (the professors) explained clearly, and now I have a better understanding about the situation.”

Another student, Daisy Vasquez, also majoring in history, added, “Wow, this has been an amazing explanation about the conflicts going on. I still quite do not know what will happen, but now I am more interested about the topic.”