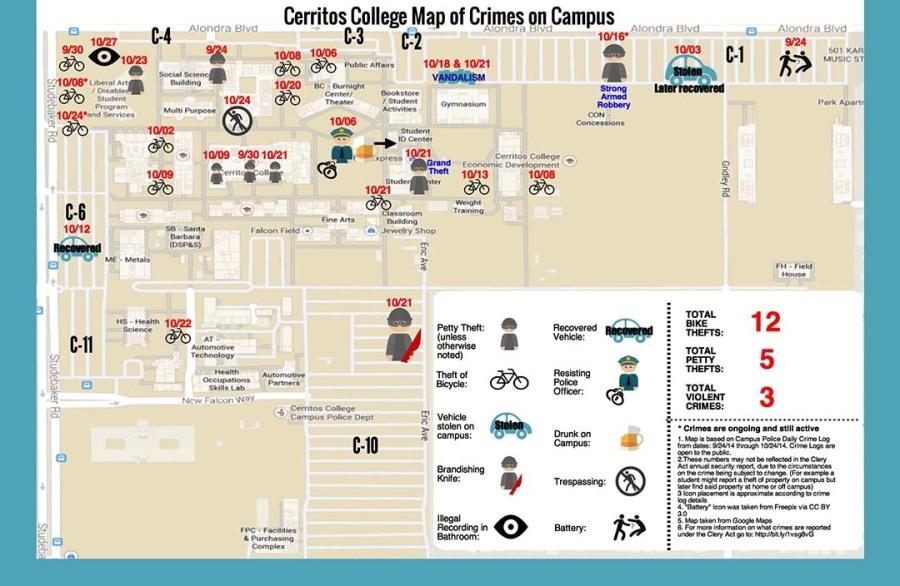 Cerritos College crime statistics based on the Daily Crime Log of Campus Police from the Sept. 24 through Oct. 24. A illegal recording incident in the L.A./DSPS occurred on Oct. 27 and was also added to the map.

A female student was accosted in the women’s restroom on the second floor of the Liberal Arts Building by an unidentified male suspect on Tuesday at 6:30 p.m.

The suspect was in the stall next to the student and had put his phone under the stall, with the intention to record her without her consent. The student waited for the suspect and confronted him. “I made a mistake, ” he said and fled the scene.

The incident was reported almost two hours later, “We received a call at approximately 8:20 p.m.,” Interim Police Chief Tom Gallivan said. Campus police is conducting an active investigation and a witness has come forth that witnessed the confrontation between the student and the suspect but not the actual incident.

Campus police will increase its presence on campus during the evening, and will start patrolling inside the buildings, according to Gallivan.

He recommends that students be more aware of their surroundings, to “get their nose out of their phone, which is something we’re all guilty of.”

There have been two other recent incidents in which the safety of a student was compromised.

On Oct. 16, there was what is classified as a “strong armed robbery,” in which the student’s cellphone was snatched out of the student’s hand. No new leads have appeared.

On Oct. 21, a student was assaulted by three unknown assailants, one of which brandished a knife. The suspects got into a vehicle and drove away.

According to Gallivan, the student that was assaulted has chosen not to press charges, even if the suspects are apprehended.

“Violent crimes are far and few between,” Gallivan said.

“That’s why we put out safety alerts, because they’re unusual.”

Students feel worried about being on campus during night classes or isolated areas.

“I drive and I have night classes, and when I walk out of class I walk out with the rest of my classmates.” Melissa Guevara, mechanical engineering major, said.

She added, “But if I was walking by myself, yeah, I’d feel a little unsafe.”

Students can call campus police for an escort to their car as long as it’s on campus.

Gallivan said, “As far as [police] escorts go, we encourage it. We have officers and cadets working and if someone is parked in a far off parking lot, don’t hesitate to give us a call.”

There have also been 12 bicycle thefts for the month of October, according to the campus police daily crime logs.

“Crimes tend to go up especially during the holidays,” Gallivan said.

Students tend to have expensive gifts in their cars and are more prone to break ins.