Safe Zone training workshop, a first of its kind 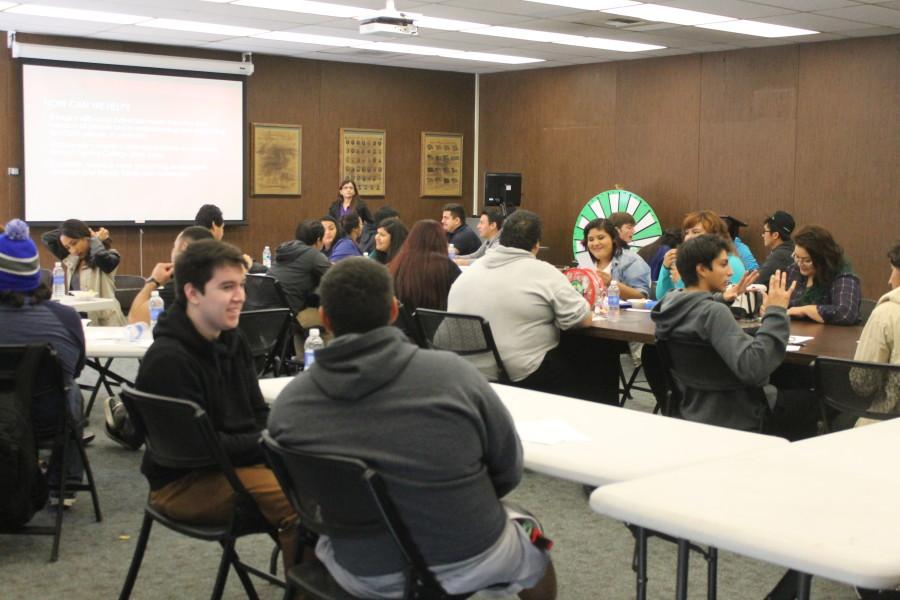 As part of an activity during the Safe Zone training workshop on Tuesday, Jan. 27, students were asked to partner up with someone they didn't know. Then answer four questions on an index card and finally speak with their partners about anything except what was on their cards. Photo credit: Nicolette Aguirre

As part of an activity during the Safe Zone training workshop on Tuesday, Jan. 27, students were asked to partner up with someone they didn’t know.

Then answer four questions on an index card and finally speak with their partners about anything except what was on their cards.

The purpose of this activity was for students to get an idea of how hard it can be for a LGBTQ (Lesbian, Gay, Bisexual, Transgender, Questioning/Queer) person to come out and not be able to talk about topics that are important to them or express how they really feel.

Guest speaker and kinesiology major, Will Hallenbeck spoke on what it was like and some of the situations he had to go through when he came out to his family.

Students were able to ask him personal questions and he responded honestly. He hopes that what he said had an impact on students and changed some of their perspectives.

“I hope, I really do. It was nice, I had a couple people come up to me and say it really impacted them and thanked me for speaking on it. That’s always my hope, that people see that there is so much more to other people around them then just the little looking glass they look through,” Hallenbeck said.

For some students, Hallenbeck’s speech and the workshop got to them and made them see the hardships LGBTQ people go through.

Diego Gomez, undeclared major said, “I think it went well, especially the student speaker. It was a different view from a personal perspective of how being gay can affect how the person carries on with their lives.”

English Professor Kolleen Kalt did another activity with students from an online website (http://www.kognito.com/ccc) where students can go to get tips on how to be supportive and make LGBTQ people feel comfortable and appreciated when coming out.

Also to rethink some of the things or words they say.

Committee member, Lance Kayser thinks it really comes down to students towards making a large change and creating awareness because, “…You guys are here, you’re in the classroom, you’re working with students in clubs, the newspaper, hanging out on campus, those are the times students often hear things and feel intimidated.

“So it’s in those moments where you can say ‘maybe I should say this in a different way’ or ‘I use to say this but maybe I should rethink that because I don’t know if everyone in my social circle is of a certain orientation.”

Kayser hopes to keep building what Safe Zone is already doing but through ASCC and all of the clubs on campus and eventually in classrooms.

The second workshop will be about growing knowledge and awareness and the third will be about making the campus more inclusive and welcoming.