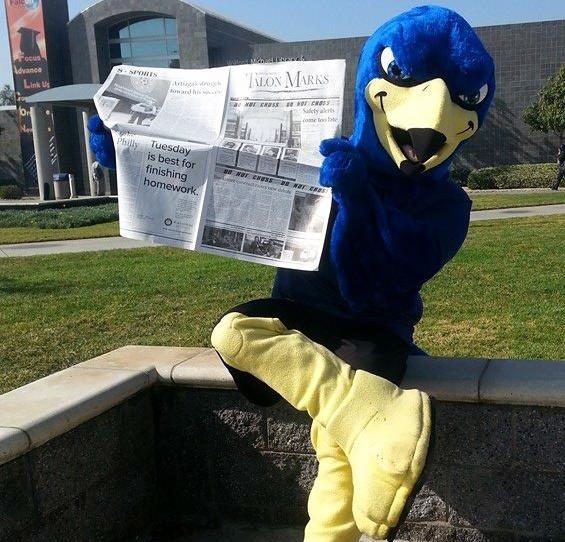 “Falcons, Falcons, Falcons!” students yelled out as the long awaited arrival of the new college mascot came running out of the Burnight Center to the amphitheater.

Many students went out to Falcon Square Wednesday and Thursday, Feb. 4 through Thursday, Feb. 5 to promote their clubs at club info day. For some, they went to go look for clubs to become more involved on campus.

Some of the clubs that were in attendance were Active Minds, Math club, Queer Straight Alliance, WPMD and many more.

Mid-way through the event, students and the band were enthusiastically counting down the unveiling of the new Cerritos College mascot.

After he made his debut appearance, he took pictures with the school’s faculty and students. Faculty was urging students to share their pictures on all their social media sites using the hashtag “#GoFalcons”. 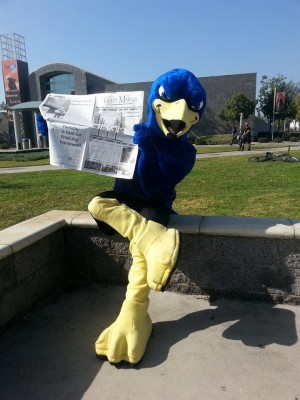 Also, students were able to give suggestions on what the new blue falcon should be named by dropping a card with their suggestion in a box.

Human services and psychology major Brenna Varney, said, “I think it’s cool that they brought out the new mascot. I had no idea that it was going to happen.”

Varney is also the president of the International Students Association and was trying to get students who want to experience different cultures to join.

“Right now is the best time for students to join because we’re in the process of planning global village. It’s an event where all the clubs get together and choose a country they’ll be representing and teaching other clubs about at a banquet,” Varney said.

Clubs were passing out candy, flyers and also incentives for anyone who was interested in their club.

The Speech Language Pathology Assistant program was allowing students to experience how people have difficulties speaking by having students put as many marshmallows in their mouth until they couldn’t anymore.

The Artists Society was encouraging students to join in a different kind of way by face painting students free of charge.

Ruben Alvarez, math major and president of the math club said, “Every week we have a weekly math brain teaser where students are able to solve a complex math problem and whoever gets the answer right will get a five dollar gift card to Starbucks.”

Business administration major Cesar Hernandez, said, “It’s good that the school has club day because students are able to get out and join groups that they are interested in and will help them in the future.”