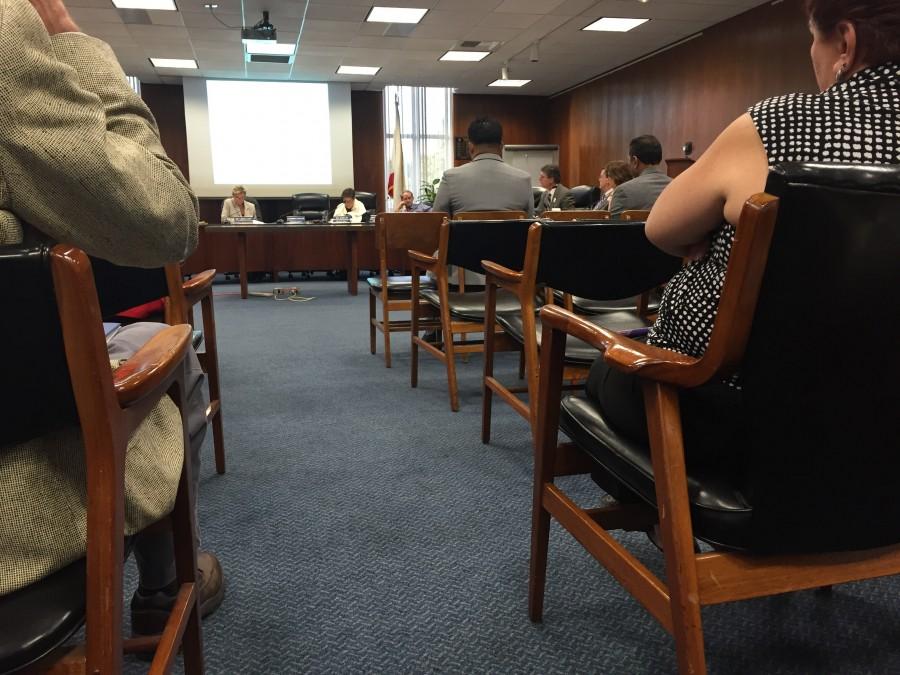 The June 10 Board of Trustees meeting was a study session where Dr. David El Fattal presented the tentative budget for 2015-2016. Among the big topics in the presentation were the addition of 120 sections and the extension of the library hours of operation. Photo credit: Karla Enriquez

The board of trustees discussed the tentative budget for the fiscal year of 2015-2016, with a focus using the reserve money to increase student development and success, an addition of sections or classes, and student use of the new tablets and laptops.

The board convened during a budget study session on Wednesday, June 12.

Board secretary Marisa Perez asked President Lacy to submit a proposal for the next meeting to discuss the use of the surplus money, which according to her is more than enough to increase operation hours for students services such as library hours, the student health center, and the child development center for summer and fall 2015 and spring 2016.

Perez added that there is $13.2 million in reserve money in the general fund and $11.9 million in unrestricted funds for fund 41 or capital outlay, about $25 million in total reserve money, which can be used for anything. There is a five percent mandatory reserve fallback to meet payroll.

“We increased the student health services fee, which means we have more money coming in and because of that we should be expanding our hours,” she said.

She also called for another add to the library’s hours of operations.

Perez said, “A lot of students work, or are full time parents, so if they can get away and come study later that’d be great.”

She encouraged students to get involved and voice their opinions regarding the proposal.

In the tentative budget, there is additional growth funding for about 120 sections, or classes, according to Dr. Joanna Schilling. The additions would be for fall and spring semester, and she has asked the deans of every department to gather data on what classes are needed within their department.

According to Schilling the information is then processed and she will make sure that the requests are within the budget. Since there are only 120 slots available, Schilling has to decide whether there is enough to fund the classes.

However Dr. Solomon Namala voiced his concerns regarding the amount of time needed to find staff to teach those classes.

“There is room for three percent growth, so why have we waited so long to add those classes?” He said.

Schilling said that she would need more than a week to collect and process that data.

Namala added that while there was two months left to do it, it isn’t enough time.

Incoming professors would need to prepare for classes and also give students a chance to know that classes are available, he said.

With the addition of tablet and laptop carts in the budget, trustee John Paul Drayer asked if there was a plan for a rental or borrowing option for students from low income families.

He added that it was something the college should be doing to promote student success.

Dr. Schilling addressed this by saying that while not opposed to the idea, there would have to be a plan to prevent thefts of the equipment.