Outstanding athletes recognized at board meeting 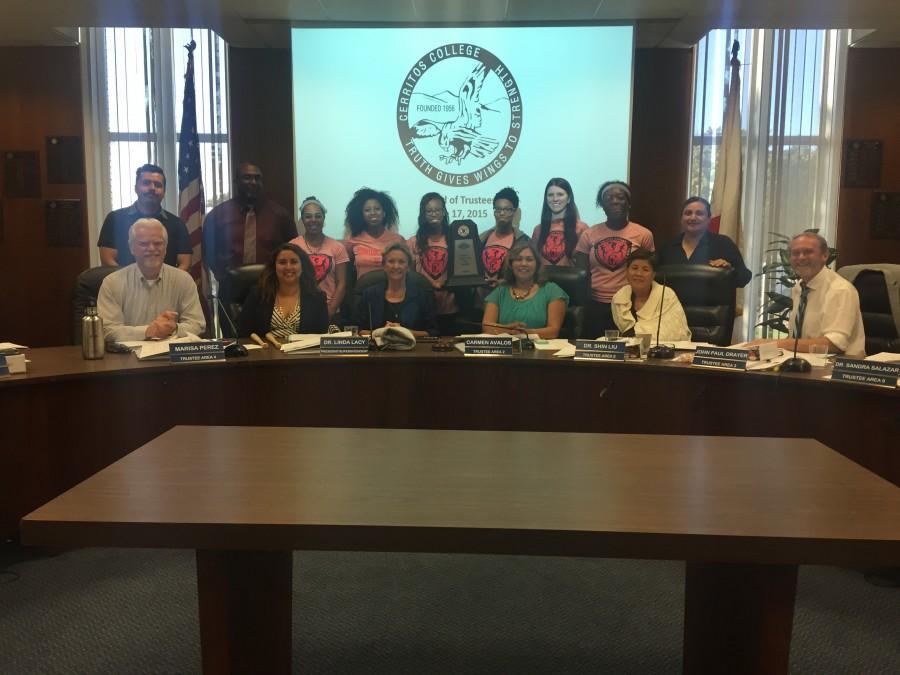 The women's track and field team was recognized by the Board of Trustees for a state championship win. The team holds 14 top 5 marks while simultaneously obtaining the greatest total GPA of all of teams on campus Photo credit: Karla Enriquez

The board of trustees recognized the women’s track and field team for a state champonship win, received a presentation on the iFalcon initiative and discussed the board’s decision on an anonymous complaint regarding Board President Carmen Avalos.

Ariel Mendez, an athlete in the women’s track and field team, broke a school record in the 1500 meter event with a time of 4:39:22.

She was not present when the board of trustees recognized the team for its state championship win on Wednesday, June 17.

Coach Michael Allen, along with a few members of the team, were there to talk about the the amount of work the team put in.

He said, “It’s always great having a state title, but the real victory is having over 21 men and women’s atheletes on the dean’s list and that’s an accomplishment in itself,”

Allen added that the team’s total GPA was greater than that of any other team on campus.

One of the athletes, Jordan Agnew, a kinesiology major, said that she developed as an athlete.

“I’m very excited for my teammates, but unfortunately I wasn’t able to compete with them, but I still enjoyed hearing how everyone did,” she added.

Agnew was recovering from surgery due to an injury and is going to Cal State Fullerton on a partial scholarship.

The results were achieved on a self-survey basis. Dr. Person explained to the board that iFalcon had a positive impact on retention and attendance rates for new students who were exposed to the iFalcon Habits of Mind concepts.

However, Trustee John Paul Drayer asked Person if the results could be backed up by attendance data.

Person said, “I don’t think it was critical whether students were going to class or not, to me the proof was in the fact that more students completed their 18 or 30 units,”

She added that the study was done to measure the cultural shift in the learning environment with iFalcon embedded in there.

Person explained that over a hundred students were interviewed, some in focus groups of 10 or 12 people over the years.

Right before the closed session the board of trustees voted on the acceptance of a report from the ad hoc committee regarding a complaint that had been received by Board Vice President Shin Liu on February 12.

The complaint accused Board President Carmen Avalos of an alleged violation of board policy 2715.

Under that same policy, a committee would be formed to examine the nature of the complaint and form a recommendation and then the board would act upon it.

Trustee Sandra Salazar abstained during the vote because she felt that there wasn’t enough information released to the board before the vote.

“I can’t really vote for something if I don’t know what it’s about, or the severity of it,” she said.

Salazar added that she did not know about the issue until she saw it on the board book and that the board members were not informed about the committee or the issue.

Trustee Bob Arthur, who was part of the committee said, “It’s confidential and deals with personnel.”

He added the committee followed the board policy and that once it made a decision that it was all they were required to do.