Mentoring Day aims to get rid of stereotypes 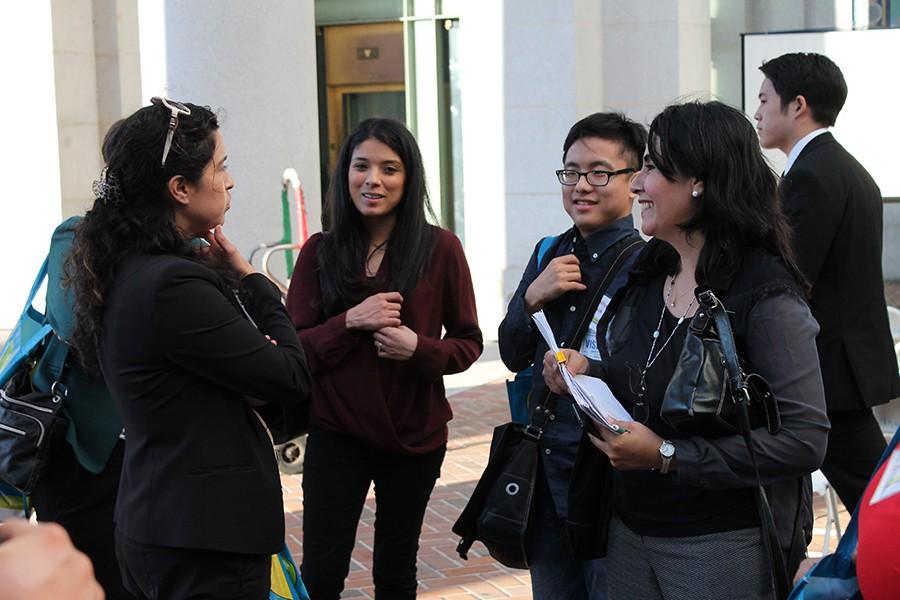 ADA coordinator and sign language interpreter Rick Pope recalled how when he was growing up, his father had a camp for deaf children.

Pope remembers two kids in camp, Walter Long and Scott Gurney, who he described as thick as thieves.

One day while they were playing ping pong, the ball rolled under a table after, which Pope went to retrieve. That’s when Long hit him in the head with a crutch, saying, “Did anyone ask you to do that?”

Long retrieved the ball and that’s when Pope realized his mistake.

Never underestimate or assume anything about anyone, regardless of their disability.

That is one of the ideas that Disability Mentoring Day, is trying to shake off.

The event was hosted by the Department of Disability and DMD Coordinator Adriana Miranda at Los Angeles City Hall on Wednesday, Oct. 21.

The event aims to break the stereotypes about people with disabilities by having students and faculty shadow a professional from a wide variety of careers.

From medical to law enforcement and even private sector.

“I haven’t slept in two days,” Miranda said about organizing the event.

She added that it wouldn’t have been possible to put it together without the hard work of many volunteers, two of, which were her daughter and her fiancee.

Bernard said, “It was really nice, we’re grateful to have this opportunity. We wouldn’t feel this inspired if it wasn’t for our mentor.”

Nelson who is a communications major and said, “She was passionate and interesting and I say that because even though she was talking about financing, she also gave me information on being a speaker and a writer.”

Pope said about the mentors impact, “They are in a situation now where the mentors end up gaining as much the mentees because the mentors begin to understand that people with disabilities have skills and aptitude and confidence.”

Cerritos College had the most students in attendance, according to DSPS Counselor Aurora Segura.

“It’s always great to hear about the student’s unique experiences,” she said.

Segura said that it was good for the students to see the mentors, some with disabilities, succeed in different areas of profession.

“It’s inspiring to see that,” she said, about how students got to see that there aren’t many obstacles as it seems.

The students get to stay in touch with their mentors for advice and information so they can prepare for the future.