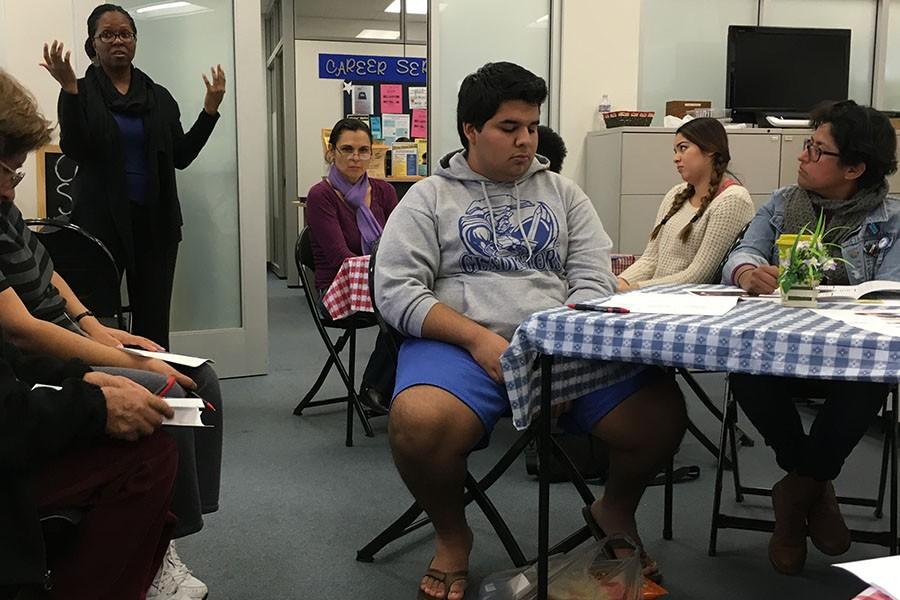 Students walked into a room with pictures on tables of various job occupations such as a doctor, a painter, a firefighter and even the Cerritos College President Dr. Fierro was represented on a table.

This was all part of the Career Café that the career center hosted on Monday, Nov. 30 in room MP 201.

As students walked in they were advised to walk around and take a look at the pictures on the table and to pick one with the pictures of jobs that interested them.

There were about 13 students that attended the café, and were provided with cookies and coffee.

Career counselors’ Clara Ross-Jones and Traci Ukita were the speakers at the event that informed students on the different career paths out there.

“Our goal is to really expose students to a variety of things that affect major and career decision making in a different way, in a coffee cookie format very casual environment,” Ross-Jones said.

The Career Center has been hosting the cafés every month on the last Monday of each month with a different targeted theme, this month’s themed was student interest.

Students were handed out an assessment booklet to help figure out what type of career path suits them based on the student’s interests.

The pictures on the table corresponded with different types of occupation genres.

Each category had different traits that went along with them, for example enterprising traits were ambitious, persuasive competitive and are usually people that like to lead groups.

Nursing major John Teano was one of the students who tested high in the enterprising category and said, “Enterprising is being able to take my ideas and make them real.”

The café was interactive with the students and encouraged student input.

Most of the students chose the genre that they tested high, based on the pictures that were displayed on the tables.

Some students even tested high in multiple genres and were informed that just means they have different skill sets.

Ukita expressed to the students that choosing a career path should not be decided over night, but instead is a process.

“This particular café was to help students gain exposure to at least one method of exploring options,” she stated.

She desires students to gather information about themselves based on who they are and what they like and don’t like and from that information choose the proper career path.