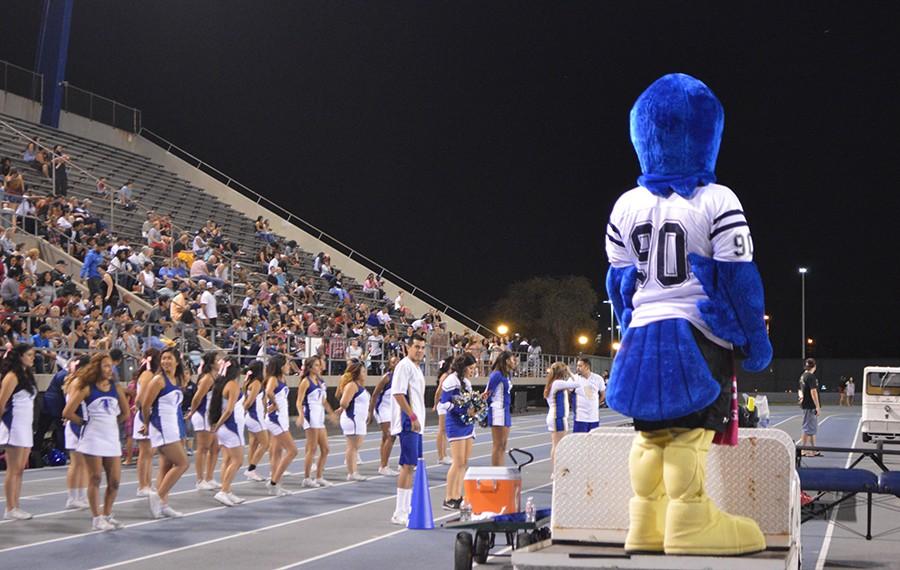 Franco Falcon animates the crowd during the Homecoming game. ASCC Senate approved to have his pay reinstated to $14.32 after last year’s senate cut it to $9.93. Photo credit: Karla Enriquez

The Associated Student of Cerritos College Senate at passed a legislation that would increase the pay of the school mascot, Franco Falcon.

Although, to the general public it may seem like a pay raise, it’s in fact just a pay reinstatement from what Franco originally got paid when he started.

The person that portrays Franco Falcon did not want his identity to be revealed because he feels that people shouldn’t care who the mascot is.

“I just want people to know that Franco did not get a raise. Franco was at a pay and then that pay was cut, and now they are reinstating that pay to what it was. So it wasn’t a raise,” Franco said.

ASCC Senate passed a legislation at the end of last semester to decrease Franco’s pay from $14.32 per hour to $9.93 per hour.

“When the reinstatement happened I was happy because I really didn’t know the pay was getting cut. I wasn’t aware of it. I just showed up this semester and was told that the pay was cut and I didn’t get a reason.

“There was no rhyme or reason to it other than the senate from last year felt that I was getting paid too much. I’m glad this senate saw all the things I was attending like football games, social media, anything with athletics that I could make it to,” Franco said.

Amna Jara, student activities coordinator at Cerritos College and is Franco’s supervisor, added, “The senate decided that Franco’s pay [the hourly rate] should be $9.93.”

Jara is the “creator” of Franco and brought him to life in the Spring 2015 semester, but was always presenting the idea to senate since 2010.

Two weeks prior, there was an attempt to reinstates the mascots’ pay with a written legislation written by Student Body Vice President Ivan Oyarzabal, but it failed to pass due to lack of information.

“What I didn’t like about it was it didn’t have specifically how much he was going to get paid an hour, the kind of difference that would make on the budget of the students and where the money was going to be coming from. That was the only difference is that I when I did it I worked with the accounts,” Villalobos stated.

The mascot attends various functions on campus and even off campus, but some feel that senate shouldn’t pay for events that Franco attends that does not affect students directly.

“I was also thinking about having district help pay for it because the bird was being used for district events, community events and other events that didn’t represent students directly,” Villalobos said.

The newly written legislation passed with ease with nearly all the senators voting to reinstate the pay, all except one senator, Daniel Flores Resendiz.

“I think we have a budget that should serve the needs of the students academically.

“We should focus our efforts on providing them with resources that will help them transfer quicker, and this is a public institution at the most basic level, we are a community college, and I don’t think our resources should go to a mascot. A mascot is more appropriate for a private entity,” Flores said.

“The next step that I’d love to see for this just to make it easier on everybody is I would love to see Franco Falcon be an actual full time position because it would make it a lot easier on senate when it comes to the money issue, right now with that whole dispute of other people should be paying if he’s at different events.

Even though he took an unannounced pay cut he expressed great zeal for his job as Franco.

“When you are looking at a mascot you should only see that mascot and that’s all there is to it. I don’t like it when people try to figure out who’s inside the suit because it shouldn’t matter,” he confessed.