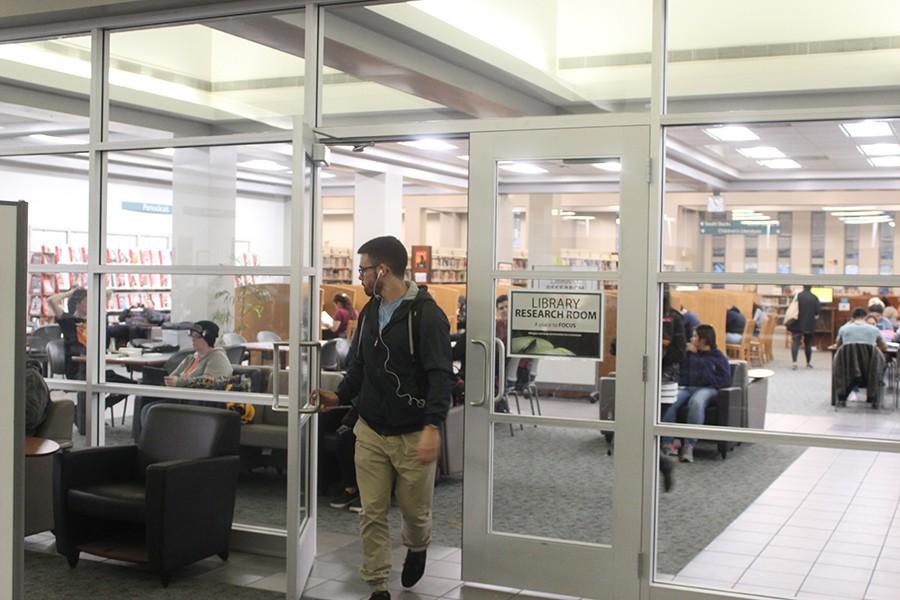 Zach Sipe, philosphy major, exiting the now closed off main stacks in the library. The divider had been planned for years by Carl Bangston but it wasn't until a recent increase in noise complaints that the divider was added. Photo credit: Gustavo Lopez

Students may have noticed a new glass partition in the library compartmentalizing the space.

Changes have been implemented in the library to contain the noise levels.

According to librarian Stephanie Rosenblatt the glass partitions went up the week before schools started.

The installation started shortly after classes ended during winter break.

“The glass wall is meant to be there so we can divide the space into two separate spaces, one for super quiet studying and one for group studying,” she stated.

“We first requested funding for that wall I think three years ago, and it has just taken this long to get implemented.

“It was approved and we have been this long to get it implemented. So we started working on the noise problem like two or three years ago.”

Cerritos College President Dr. Jose Fierro said, “It was a little delayed because we were waiting for approval to put the walls.”

Rosenblatt expressed, “Now, we’re really happy that we have the wall because when you go into that side of the library it’s really really quiet right now, so students that need to concentrate on their reading, they now have a quiet place.”

Cerritos College President Dr. Jose Fierro said, “It was a little delayed because we were waiting for approval to put the walls.”

Fierro stated that the glass partitions were already in the works when student government raised concerns during fall semester.

“It was already in the works when I spoke to the students we were already working on it and waiting for approval.

“We had the partitions on site we just couldn’t install it because it is glass and we needed to make sure we met the specs and we had to ask permission for it.”

Rosenblatt believes the partition is doing its job of keeping the noise levels down
“It’s working really well so far, it is super quiet on that side.”

“It’s working really well so far, it is super quiet on that side,” she stated.

“It’s quieter on the other side, it does help me focus without all the constant walking in and out.”

Nancy Corrales, undecided major however expressed, “I don’t really spend a lot of time in here but, maybe, for someone who does it makes a difference.

“Even without the dividers this side of the library has always been more quiet.”

Fierro expressed that he has been to the library a few times this semester and can already hear a difference.

“Obviously, you see when you come into the building that goes into the library a lot of students gather outside into the corridor and without the wall, the sound bounces a lot until it makes it inside.

“That glass wall definitely stops the sound from moving forward.”

Rosenblatt said, “People have said nice things about it so far, I haven’t checked the campus’ facebook page so far to see if people hate it.

“The people who have made time to talk to the librarians, everyone said thank you so far.”

She continued, “I think the students who wanted it quiet are really happy, I think that students that want to make sure there are lots of places to study as a group, I don’t know how they’ll feel about but I’m sure they’ll let us know.”

Fierro said, “Speaking with a few students they have reported that it is a lot quieter, also our librarians are now more effective with the sound, not that they were not effective before, but because the sound was coming from outside, it was hard to enforce lower noise levels in the library.

“Now, they have they ability to actually isolate sound with the decibel and they go around and I got positive feedback from the students telling me that they are doing that,” the president concluded.