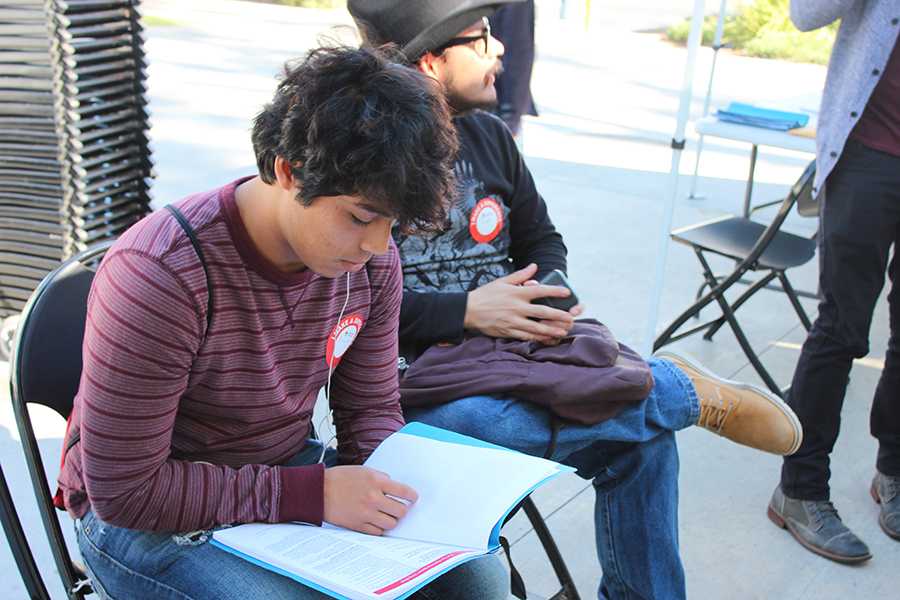 Exsavier Maldonado (left) discovered there was a blood drive at Cerritos College when he saw a flyer a the Admissions Office. The blood drive is hosted twice every semester

The event started Monday, Feb. 8 and will continue through Thursday, Feb. 11.

Folgar became aware that there was a blood drive at Falcon Square when he noticed a flyer at the Admissions Office.

He said “I am a dedicated blood donor, I have been used to donating blood every three months ever since high school.”

Undecided major Christopher Rodriguez looked forward to donating blood as it had been 15 years since he last donated.

He heard that the clubs compete through out the year and was excited because he intends to start a club in the near future.

Nursing major Lucille Ane Lovett has donated blood several times. She said that this was her first time donating blood as a Cerritos College student.

“It wasn’t until after I visited the Financial Aid office that I noticed there was a blood drive going on once i saw the Red Cross vehicle,” she said.

Due to the demand of staff for the donations the Red Cross was unavailable to provide interview responses.

Geology major Valeria Jaramillo participated as a volunteer and said she was representing the Geology and Project Hope Clubs.

“I think it’s great that the red cross and student activities do a great job motivating students to donate blood with a club competition,” she expressed.

The club that donates the most blood gets awarded a pizza party and a red cross blood drop award at the Cerritos College Awards Banquet held near the end of the semester.

“I am part of the walking class on campus and I have donated once a year for the past four years,” he said.