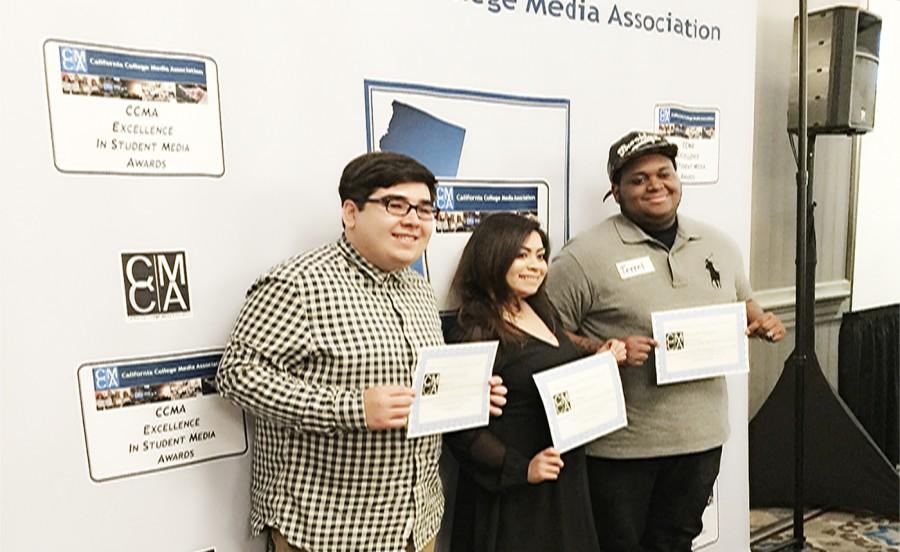 The California College Media Awards presented a third place certificate to three Talon Marks editors, Grester Celis-Acosta (Left), Briana Velarde (Middle), and Terrel Emerson (Right) for best podcast. The students discussed a new hip-hop album that had just been released, and hope to follow up on another album in the future.

The event was held on Saturday, Feb. 20 at 6:30 p.m. located at the Sheraton Universal Studios Hollywood Hotel

Grester Celis-Acosta, journalism major, said he enjoys creating podcasts because he gets to express his opinion on topics.

Celis-Acosta expressed, “I want to become a journalist, and to be more specific a video game journalist, but if I don’t achieve that I would want to cover sports or music.”

Celis-Acosta said he loves podcasts because it is an alternative for people that prefer listening to audio rather than reading.

He was excited to win an award noting that he has competed in competitions in the past, but never won an award.

He said the inspiration for the podcast entered in the competition was the idea of Briana Velarde upon the release of a rap album.

She started a discussion in the news room, the release of freestyle by Kendrick Lamar and J. Cole .

Velarde said “Me, Grester, and Terrel have a passion for hip-hop and decided to talk about our favorite rappers. It only took 30 minutes to record the podcast.”

She hopes to one day become a digital content producer for a radio station.

Open comments from the judges regarding the podcast said, “I found this to be an engaging, lively conversation among three articulate, mutual respectful reviewers. Sometimes they talk a little fast for listener to follow but I’d come back to hear more.”

Emerson, journalism major said, “Making the podcast was fun because everyone knew what each of us was talking about so it was refreshing.”

Emerson hopes to one day host his own talk show on ESPN.

All three students said they hope to create a follow up podcast soon upon the release of another hip hop album.