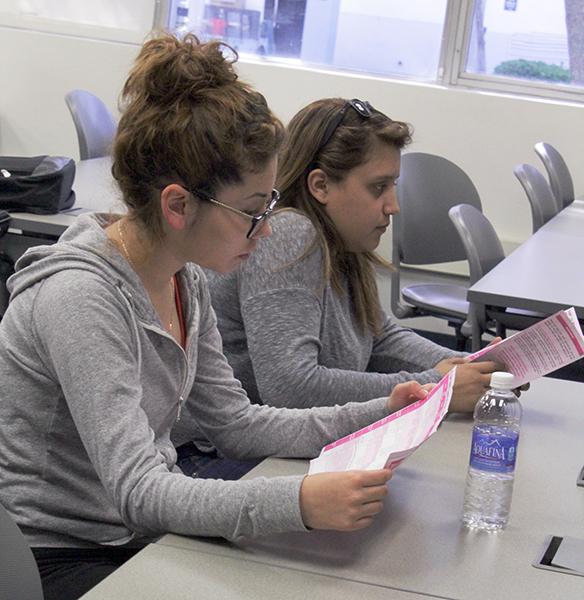 This is the topic society doesn’t necessarily talk freely about, yet is exposed to in various forms such as art, music and movies, etc.

The only probable instance where we would most likely discuss sex is with our significant other or personal doctor.

On Monday, April 11, nurse practitioner from the Student Health Clinic, Wendy Lane, gave a presentation on sexual health to an audience consisting of four female and two male students in the Business Education Building room 116.

Lane said, “We just want people to be aware, involved and responsible when it comes to sexual health.”

Students were given many pamphlets regarding to the topics discussed.

Lane is an advocate for individuals to get tested for HIV ,human immunodeficiency virus, because “You never know and if you ever had unprotected sex – it only take one time and you can become infected.

“You can have no symptoms for up to 10 years. A lot of times people in the first year think they have the flu, but that’s called the acute phase. So they blow it off and they’re fine for many years and maybe in those years they have sex with other people,” she expressed.

She adds that at the clinic it is $10 for HIV testing and everything is kept confidential.

Lane also told the students to think about their partner’s status if they were to have unprotected sex because “You should feel comfortable when talking to your sexual partner(s) about these things.

“The same way you talk about what kind of foods you like, you know, when you are ready to get intimate with somebody and have that conversation. When you are having unprotected sex you don’t know what your partner is doing.”

Erica Singsay, nursing major, expressed how as students we should be able to open up and talk about what is going on especially on a topic such as sexual health.

“I just feel the fact that us [students] coming and learning about what’s going on is something everyone has to know.

She continued, People are afraid to open up about what’s going on. I’m pretty sure they are the one’s who are sexually active but never told anyone of their situation. It is better to actually talk to them – not on a personal level but make it where everyone is actually feeling comfortable about it then they can open up and actually go get tested.

“Because usually and most likely, people who don’t open up, don’t get tested and take care of it, have something. Definitely want to take care of the problem and prevent it from escalating to a disease,” she said.

Students are encouraged to visit the Student Health Clinic as most services offered are staffed from physicians, nurse practitioners, registered nurses and medical assistants.