Firing of five Child Development teachers protested at board 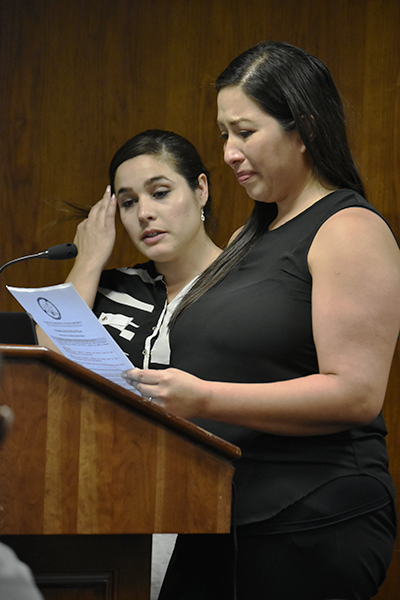 At the Wednesday July 20, Board of Trustees meeting Yhadira Bueno (front) addressed the board members during the comments from the audience portion of the meeting as Christina Galvez (back) stood at her side. With tears in her eyes Bueno told the board members how approximatetly one year ago her child was found by another parent in the Cerritos College parking due to doors being left open. She asked the board to reinstate the five teachers that were fired and fix the faulty door system that alleowed her child and others to go out by themselves. Photo credit: Perla Lara

It didn’t take much time for the board of trustees meeting to get straight to the topic teachers and parents were at the meeting for, the controversial firings of five teachers from the Child Development Center.

On the July 20th meeting, former teacher Brisa Ocean revealed, the five teachers were given the ultimatum to either resign from their positions or be terminated.

Former lead teacher for the center Amy Blandford said, “Our purpose tonight was to appeal to the board to get our positions reinstated as we were unjustly removed due to factors outside of our reach and something that has been a concern for two years.

The justification for the firings was that on more than one occasion children have left the Child Development Center area and were roaming the campus without supervision.

However, many workers in the Child Development Center have expressed displeasure with the faulty doors separating the center from the rest of the campus.

According to Business Administration Professor Gerardo Ramos, the board of trustees have known about the doors since at least June 30.

He said, “On June 30th, I was leaving the center and I saw Dean Sandy Marks and now fired teacher Amy Blandford looking at the doors. They asked me if a recently posted sign helps in closing them.

“I said ‘It does, but the doors just don’t work.’ It’s half-hazard its like 50/50. My concern is that my comments did not get to Interim Vice President of Human Resources Harry Joel.”

Ramos has had a child be a product of the center while one is currently in the center and one that is enrolled to attend the center in the future.

Yadira Bueno is a parent who got the call that her son had left the Child Development Center and was in the C-10 parking lot with another child unsupervised.

“March 26, 2015, my son and another child walked out of the facility. He was three years old at the time. A parent was outside in her car and she’s the one that saw them,” Bueno recalled.

However, it did not end with Bueno as it as happened another time since the first incident.

While she expressed a certain irritation regarding the situation, she made sure to leave the displaced teachers out of her plea to the board of trustees.

“When I found out I was just upset knowing that it happened again. My public comment had nothing to do with the teachers. I feel like it is a combination of a supervision, security and communication issue,” she said.

Many other parents of students who are in the center made their plea to the board.

Almost every story was the same as parents were given, what they considered to be halfway clear information, from their children about the firings.

“My teacher is on fire,” one parent recalled being told by their child.

Subsequently, upon knowing of the fate of their teachers, many children enrolled in the Child Development Center did not want to return to school because their favorite teacher was no longer there.

After the pleas of parents, Ocean stood up and took to the podium on behalf of herself and the other four teachers relieved of their duties, as they stood in solidarity on cue.

As a group the teachers said, “We came here in hopes [the school] would reinstate our positions so we can get back to our job of educating students for our future. And it would not put us as the scapegoat for facility and administrative issues.

Director of Child Development Debra Ward was in attendance but could not be reached for comment.