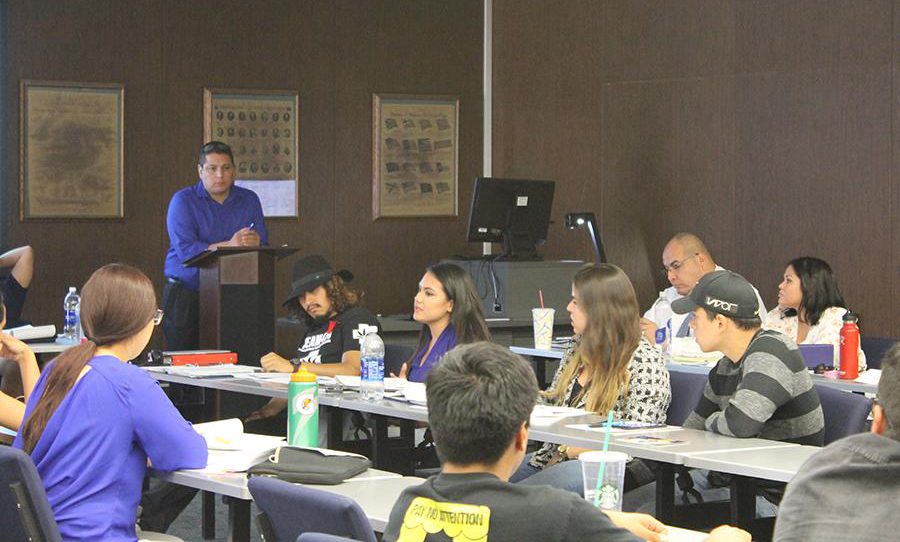 Andres Vergara, Commissioner of Budget & Finance presents the 2016-17 ASCC Budget for the Senate. The topic that lasted the longest to discuss was Falcon Kids and whether or not the budget should be cut.

A room full of senators exit the doors of BK-111/112 at the end of May and left behind an unapproved ASCC budget.

The 2016-17 budget is awaiting approval until a new senate is elected in mid September.

This comes after the 2015-16 ASCC Senate failed to adopt the budget during its last meeting for spring semester.

Student senators took time out of the hour long meeting to give their last senator reports while others took the time to address grievances they had against ASCC President at the time, Eduardo De La Rosa.

“It’s cool, not everybody gets to see everything that I do or everything that I say. It is a shame that we can parade a couple of our friends around and they can waste all of the time in the senate, when they were supposed to put in the time for the budget,” he said.

Spring 2016 ASCC Vice President Jessica Germata expressed that for her, it was important that senators gave their final reports for the school year.

“This is their last chance to speak to the students, speak for [the time spent] as a senator and I didn’t want to cut that short,” she said.

She acknowledged that to get into the budget would have been the right thing to do but also wanted senators to give each other feedback.

Commencement preparations were set to take place in the same room senate uses an hour after it convened, per Brown Act Germata could not change the room number, allowing senators an hour to vote.

Ultimately, the senate had less than an hour to use BK-111/112, using up some of its time waiting to meet quorum.

Germata noted that only senators have the power to call special meetings but they didn’t know that they should do so citing confusion about the time they had to use the room.

According to Cerritos College President Jose Fierro, the 2015-16 budgeted amounts will be used for the time being, but the 2016-17 funds will be spent. This is referred to as a roll over.

Fierro stated that this process would impact the amount of money available for the incoming senate to budget, therefore fund users should be aware that requisition approval decisions should include:

“It is important to note, if the club [or] department had an account in the 2015-16 budget, it can spend from it, subject to being currently official, for example, if the club is officially recognized for the fall 2016 semester or [is] currently in place, such as a college program or function,” he said.

Lopez noted that this process will not majorly impact clubs.

“As far as affecting the clubs, we [have come] up with measures [for] any club [that] needs funding as soon as possible.”

Lopez noted that at the time of publication no major requests for funding have come through.

“The next step is waiting until senate is elected, that is not going to happen until September,” he said.

The student body president said that after the inauguration of the new senators, electing officers and commissioners the budget will be one of the first items on the agenda.

According to the student activities calendar, student senate elections will take place Sept. 14 -15.

“We still have money […] to operate as a senate and do things in their own initiatives.

“Although this is important, […] I think the senators should […] focus on the new ideas they could bring, and the new perspectives they could bring to ASCC. They should run on their ideas not on the budget,” he said.

Lopez expressed that although senate has the option to go through the budget line by line the same way the old senate did, he doesn’t think it will.

He said, “The senate has the discretion to do so. I cannot force or tell the senate to do anything. They operate under their own discretion. […]”

“They should just take into account the amount of hours put into a line […] also account that at the end of the year they will also have their own budget that they will have discretion in.”

He continued, “I can only tell them the facts and operate under the facts and recommend certain actions. Senate is their own body, they make their own motions, and are chaired by the vice president.

“It is up to the discretion of the senate how they want to approach this 2016-17 budget although I will come with strong recommendations and facts.

“The recommendation is that this is pertinent and this is important to continue a successful year in the Associated Students of Cerritos College.”

Ultimately Lopez hopes the decision made by the student senate will be beneficial for students, “I would hope that they take my recommendations and look at the facts and do what is best for the students.”