Knowing and understanding the division between minorities and the police 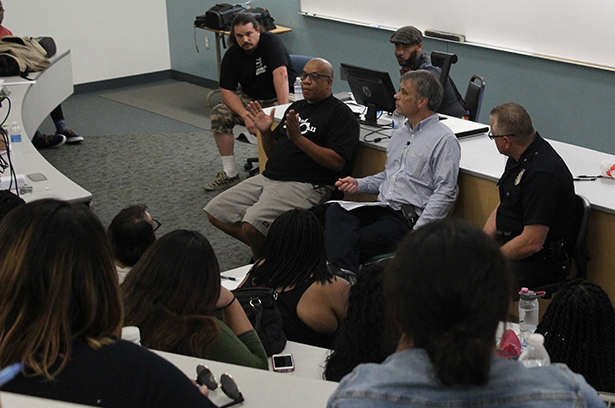 There’s always two sides to a story and this was proven on Thursday, Sept. 29 when former gang member Skipp Townsend and commander Phil Tingirides spoke to a crowd about violence between civilians and police officers.

History professor John Haas said,”I decided to talk about this because it has caught my attention to hear about the recent shootings in Charlotte, North Carolina and Tulsa, Oklahoma but sadly I have to add El Cajon, California to my script now.”

Townsend said, “In 1998, I was facing two life sentences followed by six years and I’m just grateful for being here, growing up everything was different, we used to go to the movies and everything was calm, however, a lot of that changed, and violence began to grow.

“I want to say that before I left the house every day, my mother would tell me that if someone would hit me, I needed to hit them back.”

“A lot of that has also changed because I am a different man, so now I don’t look to see what people are running to but what they are running from,” he said.

He also mentioned that by being so busy about focusing on money, he was too busy on not focusing in his community and even saw his own sons smoking and drinking.

He decided to start a union and named it “2nd Call” that has to do with helping others deal with emotions, anger and become a better person.

“We have eight classes a week with more than 300 students that has been expanding since 2006,” Townsend said.

Commander Tingirides also gave the crowd insight on what his life is on a daily basis as an officer is like.

“We have so many different issues that go into this, that are causing this problem,” said Tingirides, “The public sees what they want to see but they don’t see that this man is told to just simply obey orders and that doesn’t happen.

“I believe this is something that has been going on for years now, this is not new but now we have cameras and now we can record and even zoom in on what’s going on,” said Townsend, “What would happen in the past because there was no videos, the people who were considered experts were law enforcement.”

To finalize Dr. Haas thanked both Townsend and Tingirides for joining and said, “We need to be bilingual, not in English and Spanish kind of sense but in knowing and viewing both sides in regard to community vs. police.”