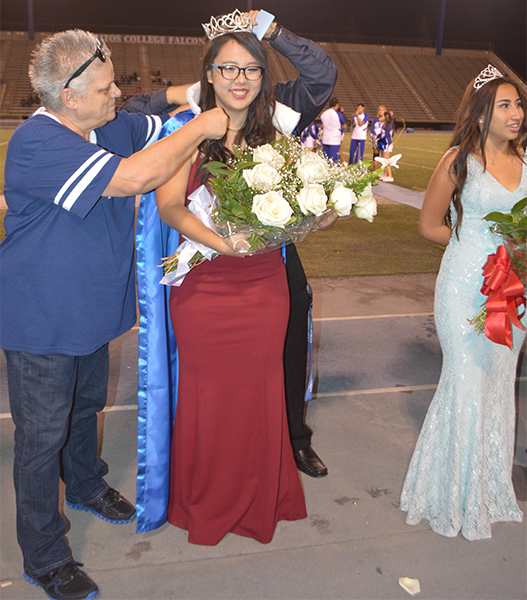 Megan Kim was crowned homecoming queen on Saturday, Oct. 15. She was escorted by her friend Jonathan Lim and was sponsored by Phi Theta Kappa.

“I was pretty confident after elections because a lot of people told me ‘oh, I voted for ballot number two, ’ which was my number. But I was still shocked when [my name was called],” expressed homecoming queen Megan Kim.

During half time at the homecoming football game, the winner for homecoming queen was announced, and much to Kim’s surprise, she won the crown.

“I’ll be honest […], this is my second time [running for] homecoming [queen, and] I was a princess last year. I didn’t win obviously, but what I learned was I [campaigned] too hard for the princess round.

“It’s top seven, people [can] vote for seven people, so for the princess round [this year] I didn’t [campaign] too hard. I just [sat] by the voting stations and [said] ‘hey, if you’re voting, vote for me.’”

She continued, “For the queen [campaigning], I went all out. I got posters, my friend Alexa Mendoza designed the poster, and flyer[s], and t-shirts for me. I made 43 t-shirts [and] handed them out to students. Students were walking around advertising me [in my t-shirts] and I had my poster[s] everywhere.

“I went to see the football team, wrestling team, baseball team, and [also] this is when all my friends came out to support me. They didn’t campaign [with] me in the princess round, so they campaigned the queen round.”

Kim did admit that campaigners and candidates were making fun of her because she was in a dress, but she had on running shoes.

“They were saying [things] like ‘oh my gosh, you’re really running people down!’” They were throwing [insults] at me, and I noticed it. They didn’t think I [would].”

She expressed that she did not want to reveal the name of the campaigners and candidates who were making fun of her.

“It was really hard, but I did manage to ignore them. What I did was, I focused on myself a lot because as soon as I [would’ve gotten] distracted [I would’ve lost the campaign]. Even though they were yelling over me, [and] they were laughing at me, I just ignored [them].”

Kim said she was successful in wining people over by telling them all the things she had accomplished for the students at Cerritos by being apart of student government.

“[Students] seemed to really like it. [People would tell me] ‘you worked hard, I’m [going to] vote for you.’ My friends [also] said some things [to help me get more votes].”

Princess Bailey Ann Spillane, sponsored by the Math Club, admitted that she was honestly disappointed because she thought that she could break the mold as a woman in a wheel chair accompanied by a transgender woman.

“We were really trying to break the mold and be the face of the future. We were trying our best, but you know, it is what it is.”

She continued, “We didn’t work that hard [to campaign] this time around, only because as [the president of the Math Club] I will not miss class for something like this. I wasn’t going to do that and be a bad role model for the rest of my students.”

Princess Elizabeth Aceves, sponsored by Karbarkada Club, expressed that she knew that because Kim put in a lot of effort, time, and money into campaigning, it wasn’t really a surprise that she won the crown.

“But it’s like good for you, you worked hard for it. I didn’t campaign as hard [because] I was […] new to this. I just talked to people [and] passed out some flyers, but I wasn’t campaigning with posters, [or] candy.

“[I only campaigned in my] classes. […] Other people that were campaigning for me, [went] into other classes and I was kind of busy either with tennis practice or I had to work. This wasn’t my priority.”

She continued, “I wasn’t disappointed, I mean, I don’t think [Kim] was the best candidate. If you look at the [princess] election, she had [less votes than Bailey and I], so it’s kind of like how did she out of nowhere [win the queen elections]. But like I said, she did campaign harder toward the end. You probably saw her running around campus.”