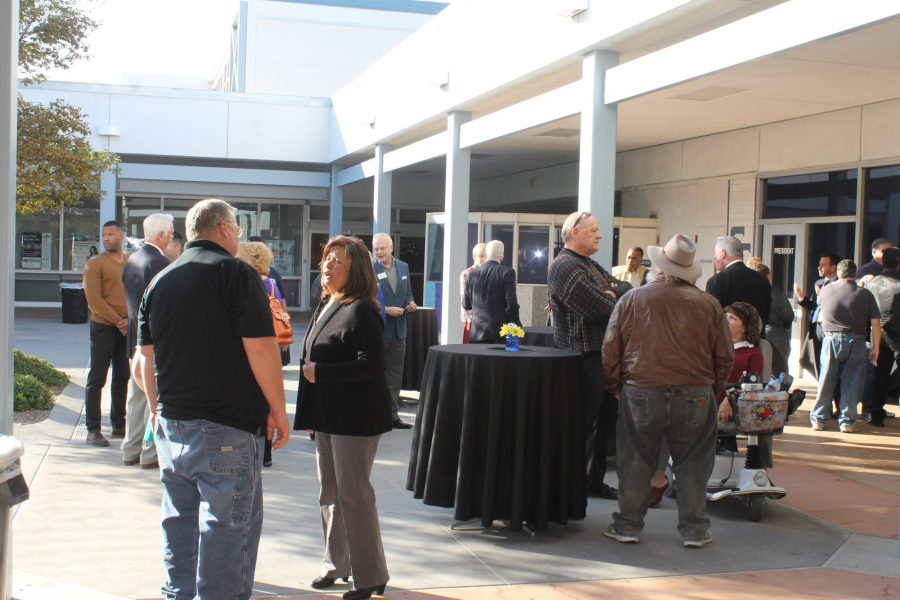 Faculty and staff gathered around in front of the board room to celebrate honoree, Bob Arthur. Arthur, who recently lost re-election for board of trustees, is retiring after 20 years of service. Photo credit: Alvaro Bayona

Now that we’re approaching the last few weeks in the year, it’s time to say goodbye.

On Thursday, December 1, Cerritos College led a retirement party for board of trustees member Bob Arthur, who has served on the board for 21 years.

In fact, he used to also be a mayor and councilman for the city of Norwalk.

“It’s really sad but I wish [Arthur] well as he retires. As just like before, I support him on his decision and think what he’s doing is right. Sure it’s sad, but we should let him be himself on this new decision. He was a very good man because he believed a lot for the school and the people inside it. Wherever he goes now, let him be well,” board member Carmen Avalos said.

Arthur, who addressed the audience, began his speech with expressing thanks to his family.

“Jenny, Debbie, and Robert [Arthur] are all graduates of Cerritos College, and I couldn’t be more proud. Thank you to my optimist members that are here, as much as the joking and kidding that came with the comments about being the incoming president of the optimist club of Cerritos I am truly looking forward to it,” he said with humor.

Arthur described the beginning of his service on the board of trustees as starting off in the year of 1995 when he was presented the opportunity to run. He explained how the prior year he lost his re-election bid to Norwalk City Council.

“It sucks to lose. I had said, ‘yeah, I’m done with public service, thank you very much,’ that’s what I’m thinking. I thanked Pam and Wayne for their thoughts of considering me, that I would be a good trustee [to] represent Cerritos College, and I was a good fit for [the] college. I got home that day and told Sue [Arthur] about it, I think it was the following day I went to the register recorder’s office and told them ‘yeah,'” he said.

Arthur acknowledged that his time at the college has been a pretty good run for him.

“A couple of days ago I started reminiscing about some of the history of what I’ve done here at Cerritos College. Doing the math and trying to put things into perspective, and over the past two plus decades, over a million students have enrolled here at Cerritos College in the time that I’ve been on the board. Approximately, 900 board of trustee meetings, committee meetings, subcommittee meetings, conferences, department graduations, board retreats, all of these I’ve attended during my time here on the board, and honestly, I’ve enjoyed every [single thing].”

Arthur expressed that he wouldn’t trade any single moment for anything else. For his final thoughts, he publicly thanked the people staff and faculty of Cerritos College.

“I thank Arthur on a lot of things. I thank him for his commitment to the school and the community. I knew him since the time when he helped out a lot back when we used to work for Downey Unified and moved his way up. Also, he really did more than what was necessary. Now that he leaves, I wish him the entire best on the rest of his life,”she said.

Joseph Derthick of the Norwalk Chamber of Commerce expressed how proud he is of Arthur and how he will miss his colleague.

“Now that’s he is retiring, I’ll miss him and his great times here. I’m absolutely proud and happy for his accomplishments that have been passed down and understand that what he’s doing now is for the best. For his time here, he was very much involved in everything that went on because he had a great heart and mind.”