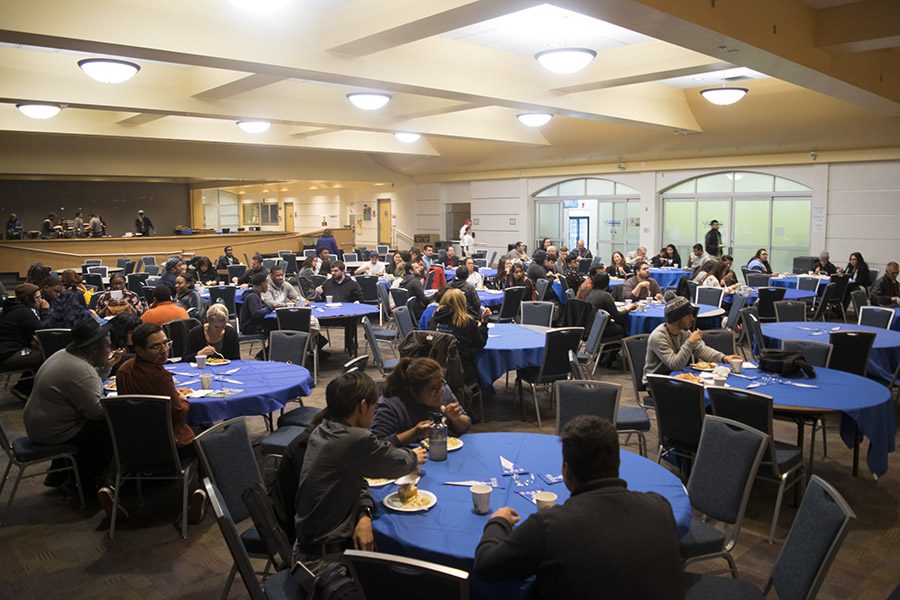 The audience at the Club Advisory Reception enjoying the vast performances held in the Student Center. The Cerritos College Culinary Arts Department provided the tasty meals for the events. Photo credit: Dennis Osorio

The event kicked off with a solo vocalist covering Gloria Gaynor’s disco classic “I Will Survive”, followed by a student rock band, a flamenco guitar player performing some of Pink Floyd’s most famous numbers, and a clarinet performance by a one of Cerritos College’s very own professor to end the event.

Amna Jara, Student Activities Coordinator, said it took her and her team roughly a month to prepare for the reception, and believes these types of gatherings are very beneficial to the student body as a whole, as well as to join a club in general.

“It brings our students together for a common purpose,” Jara explains, “And you have down time between classes, so it’s good to be together and network rather than, you know, going in the library and hanging out by yourself, or going across the street and eating by yourself.”

Newly appointed Interclub Council Commissioner Kadie Gurley, agrees with Jara, and was impressed with the club participation count, even with the short amount of time she believes they had to prepare for he event.

“We would wish to have more clubs out here,” Gurley states, “but for the little time we really had to promote the event it was really good.”

Gurley, who is also part of the Commercial Music Department, said locating the talent for the show was done in an open mic and word of mouth way, giving eager performers the chance to get on stage and exhibit their talents.

As for the talent of the show, the band “Out of Nowhere” which members attend Cerritos College, consists of a drummer, a piano player, a guitarist, a bass player and a singer, gave a pop-rock performance playing three of their songs making the audience clap their hands at the rhythm of the drums.

Bass player and commercial music major Andrew Jones, who goes by “AJ” says that the band has been together since October when everyone met in a recording class. He also mentioned that they’re having an EP release party on Feb. 3 at 7 p.m. in the Burnight Theatre with no cost.

The EP will consist of six songs and pre-orders will be available for purchase.

“I just love expressing myself, it is the best form of self-expression,” he strongly stated.

Professor Mark Fronke, 60, from the Accounting Department was also one of the performers, delighting and surprising the audience with a beautiful piece; singing and playing the clarinet. His comedic acts and gestures made the audience crack a few laughs during his performance.

He said that he owes his involvement with music to his mother, because when he was in the second grade he was required to play the piano and not until fourth grade was he able to choose an instrument and then ended up choosing the clarinet.

“I play the saxophone, piano and the clarinet,” he said, although he says he does not play his instruments on a daily basis.

He also said that he does not have a specific date for retirement but whenever that date comes, he will continue to play his instruments.