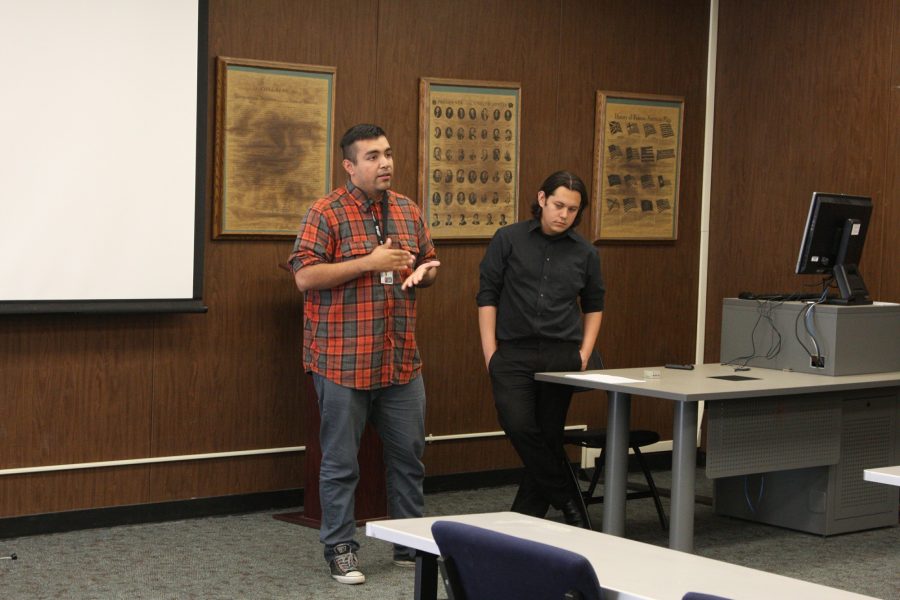 Dream Club President Luis Guzman is discussing the goal of Education Without Borders. It will be a week-long event on campus. Photo credit: David Jenkins

As ASCC cabinet approved funds for the Education Without Borders conference, Commissioner of Sustainability Phil Herrera says,“The conference is a coalition of clubs including Mouimiento Estudiantil Chicanx de Aztlan, Dreamers [and] Chicanos for Community Medicine. So, it was kind of a group effort but we did have representatives from each club working as a committee.”

According to Herrera, MECHA is known for creating significant events; so he says that this is bound to be successful.

Luis Guzman, head of the Dreamers club, who spoke to cabinet about receiving the funds was quite pleased with the ASCC Cabinet and gaining the extra help it needed.

He also went on to express his confidence in the assembling of the event.

“We have a lot of good people working on this, a lot of people who are dedicated who really selfless and really trying to help out the undocumented community here on campus. People like Student Trustee Karen Patron has really put in an amount of effort in organizing this and putting in a lot of thought. MECHA [members] are big supporters of ours and they’re helping. Having one of the bigger organizations on campus helping us out can really go a long way.”

Commissioner in Daytime Activities Marlene Estrada also helped with putting the conference together and being one of the key players in having two clubs cooperating with each other.

“Education Without Borders is one week-long event hosted by clubs on campus for the community of undocumented students and their respective communities. I came across the committee because I was approached by the Dream club president Luis Guzman. He asked me [the MECHA club and campus] if I would be interested in participating in the event. I then went to my club and asked if they would participate and they were more than happy to help put this event together with the Dream club,” Estrada said.

She also went on to conclude her feelings on ASCC Cabinet members giving the funds to help out with the week-long event.

Herrera says,the goal of the Education without Borders conference is to go out and reach out to high school students. They want to promote community colleges for these future students. They also want to bring awareness to the clubs here on campus and their support of the undocumented communities.