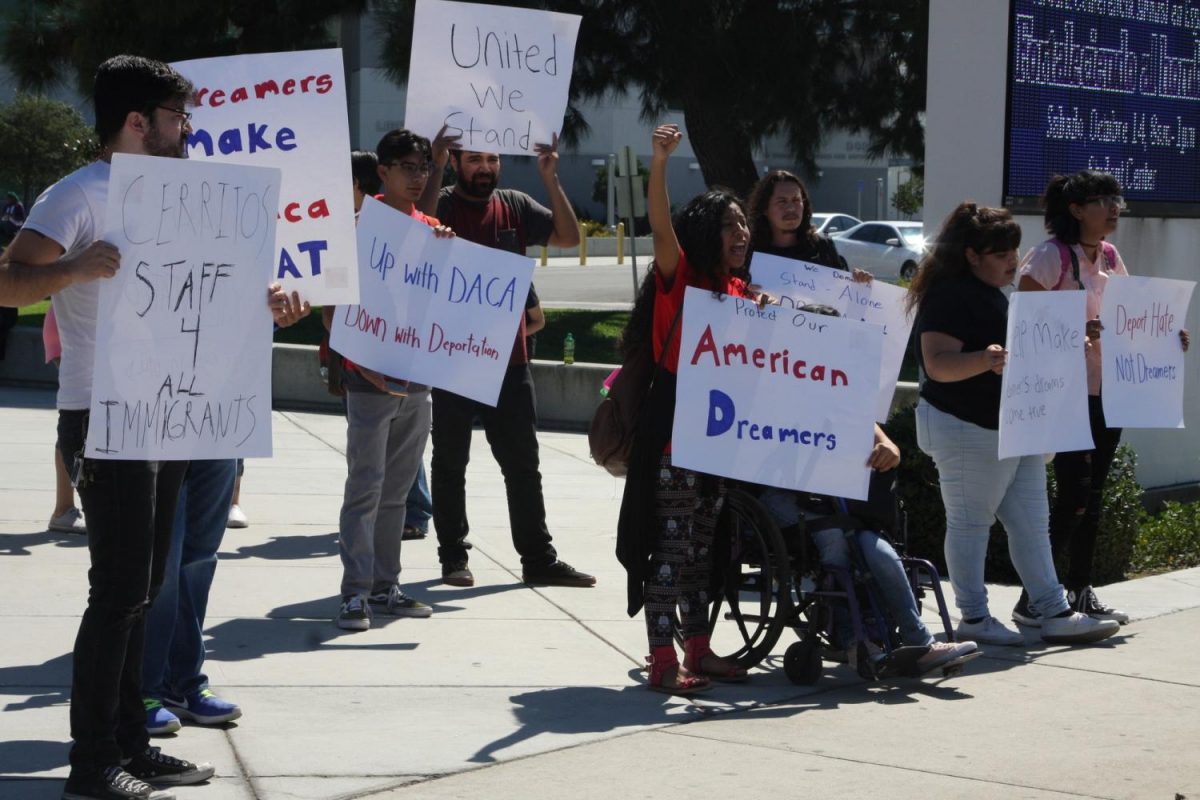 Cerritos College students came out to stand and make thier voices heard afther the DACA Town Hall meeting. They stood on the corner of Alondra and Studebaker. Photo credit: David Jenkins

The spontaneous rally was announced at the end of the Deferred Action for Childhood Arrivals town hall meeting on the same day.

Cerritos College counselor and Development, Relief and Education for Alien Minors club co-advisor Lynn Wang states that the “rally was an organic effort from the student leaders.”

Student leaders such as Luis Guzman spearheaded the rally, along with the help of fellow peers and faculty.

Guzman stated, “We just want to be like everyone else; we want to speak our minds, express ourselves if we want to because for many undocumented immigrants, we don’t feel like we are a part of this society. It’s like society’s telling us not to belong so really we are expressing ourselves…”

Roughly 13 to 15 students and faculty showed up to participate in the rally.

Wang initiated chants, such as “This is what democracy looks like” while Guzman and fellow peers provided signs, with slogans such as “Deport hate, not dreamers” to those who joined the rally prompted after the town hall meeting finished.

Wang said the main message of the rally, “was about DACA, immigration and unifying all students on campus, despite ones citizenship status.”

Some professors took the opportunity to make the rally a learning event by taking their class out for a bit to have the chance to speak with those holding signs and chanting to passing motorists and students.

Motorists honked their support for those rallying, while passing students asked to take photos of marchers with the intent of spreading word of the rally via social media.

English major Marvin Rodan, participated in the rally and said, “I think this cause should be addressed because a lot of people are suffering from this topic and I think that matter should be a solution for people to stop being afraid and for people to feel more comfortable in school and in the community.”

The rally was received positively as no students or motorists countered or confronted the students against their message.

Rodan stated his view on the rally and its overall message, “It’s raising awareness that there are students that want to succeed but they can’t because of their immigration status.”