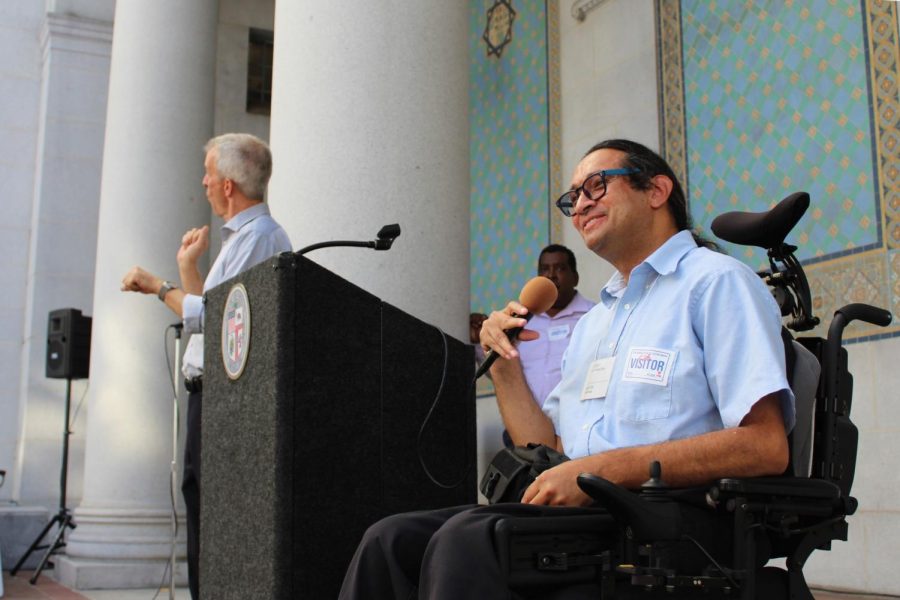 Students with disabilities of all kinds were given a positive experience by DSPS.

This experience was an event held at Los Angeles City Hall, and revolved around empowering and mentoring students, in order to help them achieve.

Erin Lane — a Cerritos College student who receives services from DSPS — expressed what a good time she had, saying, “Today was really fun, being with ranger Brown. We went offroading, up in the mountains [to] one of his favorite spot [to] get away from the stress at work.”

She revealed that “Ranger Brown” reminded her of her late grandfather — who would also “go up in the mountains, just to enjoy the grounds.”

Lourdes Sinibaldi — management analyst for community outreach, referrals and education for the department of disability — played the role of liaison between mentees and mentors, visiting colleges throughout Los Angeles County to invite students to attend the event.

Sinibaldi was also responsible for bringing the mentors to the event itself, on Wednesday, Oct. 18.

According to Aurora Segura, who facilitated Cerritos College’s involvement in the event, “the students enjoyed a day of job shadowing with their mentors at places, such as:

L.A. City Hall Information Technology Department–students majoring in computers learned about the duties of an IT technician.
L.A. City Hall Finance Department–students majoring in Business learned about careers in accounting, budgeting, and inventory
Huntington Drive Elementary–students majoring in child development shadowed teachers interacting in a classroom setting.
Los Angeles Zoo–students interested in zoology got to see the behind the scenes of what it takes to run a zoo and take care of animals.
Los Angeles Trade Tech College–students visited the various department and learning about working at a college in a variety of different positions.

She also called to mind the fact that the college also was acknowledged during the dinner ceremony, where it received a Certificate of Recognition signed by Councilmember David E. Ryu, 4th District.

“We had two of our students- Ben Partida-Silva and Erin Lane- get up […] to talk about their very positive experience with Mentoring Day,” remarked Segura, saying, “Many others expressed their gratitude and appreciated the opportunity to learn about careers that they might not have known about otherwise.”

“This is smaller, more intimate,” said Sinibaldi about the relatively small group that her program attracted, continuing, “to make sure that we capture every element that the event has to offer.”

The management analyst commented on the spirit of the event, saying that it is import to have events like these — to help students not to look at things from only a professional or academic standpoint, but to jump into the unknown.

That was the case for the aforementioned Ben Partida-Silva, a computer science major, who took a tour IPA department.

He commented on being allowed into the server room, surmising that being a “computer nerd,” he was in heaven.

“We got to see the ways they set up the servers, the live servers that we see on multiple screens. It was beautiful.”