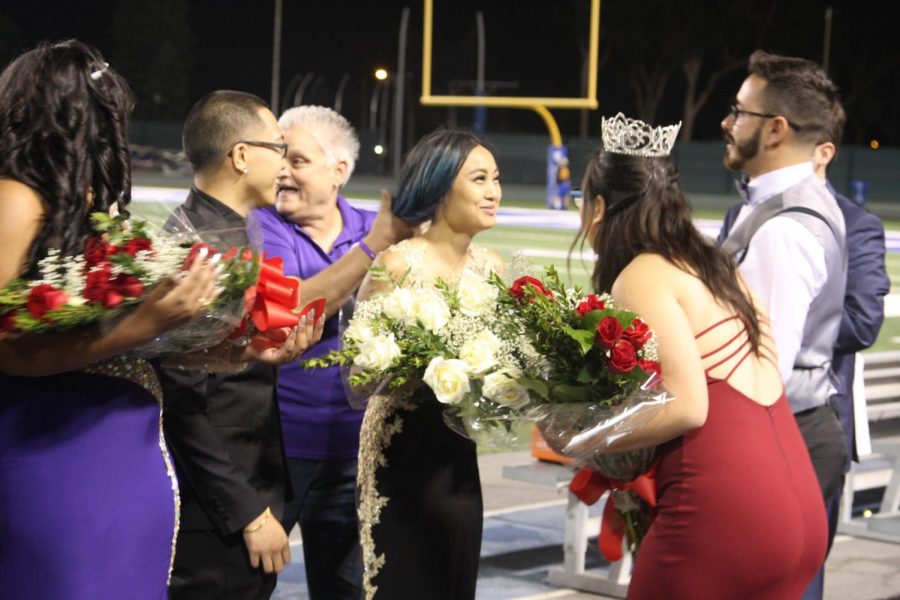 Jazmine Jose is crowned 2017 Homecoming Queen. The 2016 homecoming queen, Megan Kim, was invited back to be a part of the event. Photo credit: David Jenkins

The 2017 Cerritos College Homecoming queen was announced during the Oct. 21 football game’s half time.

Jose, a psychology major, was backed by the student veterans club on campus and was accompanied by her boyfriend Justin.

Jose said, “I am actually really shocked that I won because I did not really have a campaign strategy.”

She explained that while campaigning, she brought her dog to help attract people because “everyone likes dogs” and hoped that this would help her gain votes.

The 2016 Homecoming queen, Megan Kim, was also invited back to Cerritos to be part of the event.

In 2016 Kim was promoted by Phi Theta Kappa.

Netrayana was backed by the Child Development Club and is part of the Abilities Empowered Club on campus as a club officer.

Pastor was escorted by her brother Hayden Pastor and was promoted by the Student Athletes Captain Council.

Negrete was escorted by her father Eddy Negrete and was endorsed by Alpha Gamma Sigma.

Negrete plans to attend a four-year university to study sociology and environmental law and is passionate about animal rights and agriculture.

Carranza was accompanied by her friend Carlos Andres Garcia and was promoted by Phi Beta Lambda, the business club on campus.

Carranza is an officer for Phi Beta Lambda.

Carranza hopes to get a bachelor’s degree at a four-year university in business marketing.

Gatlin was accompanied by her father Arthur Gatlin and was sponsored by the UMOJA club. Gatlin is also part of the Black Student Union club and HLP movement.

Gatlin hopes to transfer out of state and become a flight attendant.

Parton was escorted by Enrique de Avalos and participated as an independent runner. Patron serves as the current ASCC President.

Jose’s family has served as part of the United States Navy and said, “I just want to participate more and get the word out to help the veterans on campus.”

In the future, Jose hopes to be able to train therapy and service dogs to help veterans.

Kim said, “I am honestly happy,” about seeing Jose win as the 2017 Homecoming queen.

“I am happy she felt the happiness I felt when they announced my name [last year] as the homecoming queen- I was screaming. Jonathan [Lin] was covering his ears.”

“Jonathan Lin is my friend and he has been my number one supporter for homecoming since day one.”

Lin was part of Cerritos College as a former ASCC senator.

Kim said, “I hope she will have a fruitful reign.”