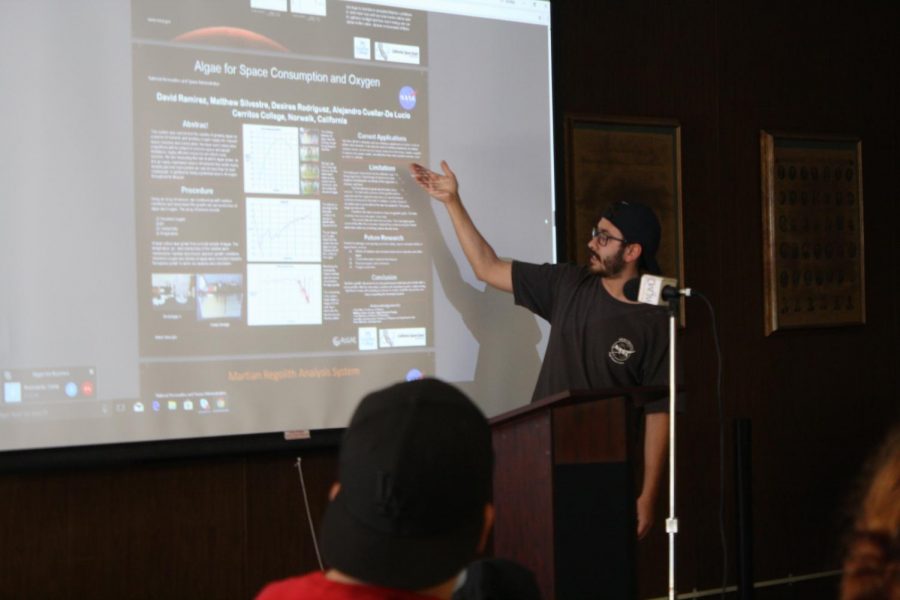 Vice President David Ramirez gives a presentation on how the Arduino internship benefitted students and that he specifically wanted to fund undocumented, AB 540 and international students. He said, " I think that it's not fair when students who have that capacity or exceed that capacity are not able to do so because the fact that they are deemed a category of people who are ineligible."

A discussion broke out in the Associated Students of Cerritos College senate concerning an Arduino internship with NASA. It focused on the question to whether undocumented, AB 540 and international students should be prioritized in legislation.

The Arduino Internship Opportunity is in association with the NASA California Grant Community College STEM Project.

The internship has been offered at Cerritos in past years. It gives college students the ability to learn and use skills to create projects which will be presented and evaluated by NASA.

The legislation was introduced by Senator Sarah Montes De Oca and seconded by Senator Christopher Rodriguez. It was presented to the student council by ASCC Vice President David Ramirez during the ASCC meeting on April 4.

The legislation included in it a request to increase funding for the internship opportunity.

This is to allow an additional two students to participate in the program, which is currently at an even ten, as the funding allocated this year is less than years prior.

During the presentation by Ramirez, an issue was brought up by those in attendance regarding who should be considered to fill the additional two openings.

Some in attendance at the meeting argued that the legislation should take further steps to include and prioritize undocumented and international students.

Others argued that priority should not be given to undocumented students, but instead focus on all students who are interested.

Ramirez, who previously participated in the program, had this to say about the scrutiny, “I believe the senate wanted to cover the entire spectrum of people who are impacted by the restrictions in funding of the program, the amending today was to make sure they covered everyone.

“The professors already have it at heart that they want to fund students who are undocumented, AB 540, or international students. They wanted that on paper. I think that it’s not fair when students who have that capacity or exceed that capacity are not able to do so because the fact that they are deemed a category of people who are ineligible.”

Senator Robert Campbell argued, “There is a lot of money that could be going to this legislation, because its a fantastic piece of legislation.

“My concern is if we expand the scope of this or we reallocate absolutely anything, we want to make sure that we don’t give just a certain specific group of people this opportunity.

“Especially if we increase it to more than two students like we did last year. We want to extend this opportunity to all students on the campus.

“The wording that we had currently didn’t allow for anyone outside of undocumented or AB 540 students.”

Rodriguez, who supported the legislation stated, ” From what I’m seeing they want to make sure it’s not just AB 540, undocumented students, or permanent residents, they just want to make sure that it’s available to everybody.

“I think it needs to be a little more diverse. Albert Einstein was an immigrant, and he was a genius. I think it’s better to bring people from different countries and cultures, and gain from their knowledge.”

Ariana Hernandez, a Cerritos College student, was present during the meeting. She stated, “I felt it was unfair to add only two students, we do the same amount of work.”

Hernandez is part of the Dreamers Club, and is very concerned about the direction in which the legislation is taking.

According to her, the senate should do more to include undocumented students. “They have to add a total of six students, to include all students here at Cerritos College.”

The discussion about the legislation will continue during the next ASCC meeting on April 11.