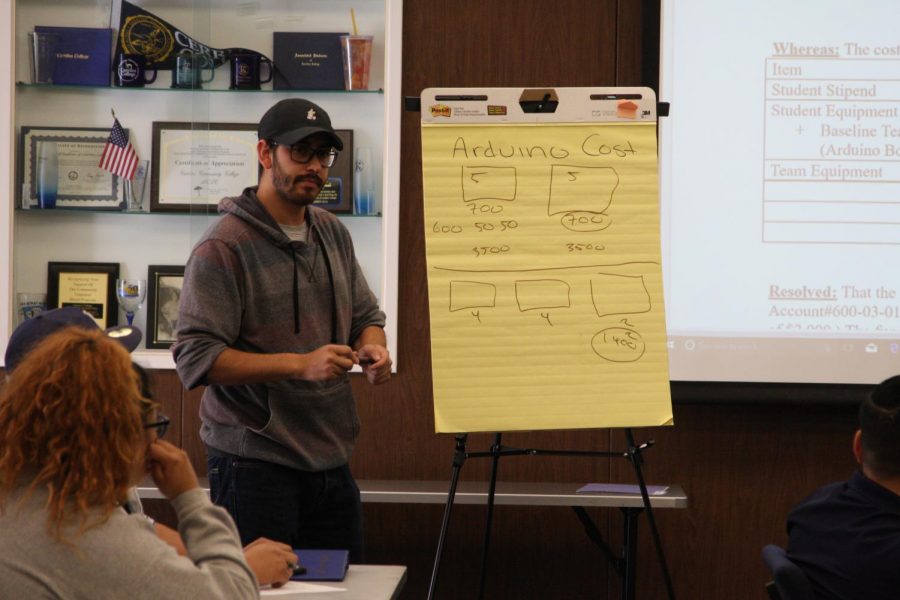 Associated Students of Cerritos College Vice President David Ramirez explains the legislation to other ASCC senators. The legislation had been on the agenda for three weeks.

The legislation will fund two students with about $1,600, which includes a stipend of $600 per student.

The senate bill was originally presented on April 4, but was brought up twice after the original presentation due to “confusion” and disagreements about how many people to fund said ASCC Vice President David Ramirez.

The legislation was introduced to fund ineligible, AB540 and undocumented students, mainly. The reason for this was because the Arduino internship is federally funded meaning that the funds could only be received by United States citizens.

The bill, which included many recommendations added over two weeks, was passed after being reverted to the original proposition.

Disagreements arose when some senators recommended to fund six students instead of the two that were initially proposed.

ASCC sergeant at arms Christopher Rodriguez said, “The thing is that it would have been great to have more people.”

He also explained why the number of students was reduced, “It had a lot to do with a sort of budget crunch that we have.”

However, some, including Ramirez, highly opposed the motion to increase the number of students since it meant that participants in the program would only be funded for half of what US citizens would be.

Ramirez, visibly shaken, relinquished his chair and said to other senators, “do you know what y’all just passed. I just don’t think this is right. It’s wrong.”

When senators proposed to revert to the original legislation others opposed the recommendation. They argued that it would mean that time within senate would have been wasted.

Rodriguez agreed with the argument saying, “to me, honestly, it was time wasted. I mean the math was already done. The numbers were presented the way they were supposed to so.

“In reality, yes sometimes I don’t know people just like to argue the fact that it’s worded wrong or that it should be worded differently, but when it came to the math it was a bit of time wasted.”

Ramirez disagreed saying that he did not think it was time wasted because it is all part of the learning process.

In the end he said, “It is good to see everyone contribute to the conversation and thinking about things I didn’t see. So I’m happy that the senate was able to see it from different perspectives.”

Rodriguez recommended additional methods of funding, “It would be better if people started using the Cerritos College Foundation a little bit more because it’s a source that not a lot of people use.

The Cerritos College Foundation is an on-campus organization that finds scholarships for various departments.

Ramirez invited anyone who was interested in seeing what Arduino participants do while in the program to an on-campus event where the projects will be presented.

He said, “A lot of Arduino projects that were past presented or past done will be presented at the STEM Open House and we will have all of the poster boards there with people talking about them.

“If people want to see what this program really is about and what its done I’d ask for them to come down on April 27 at 9 a.m. to see these projects.”