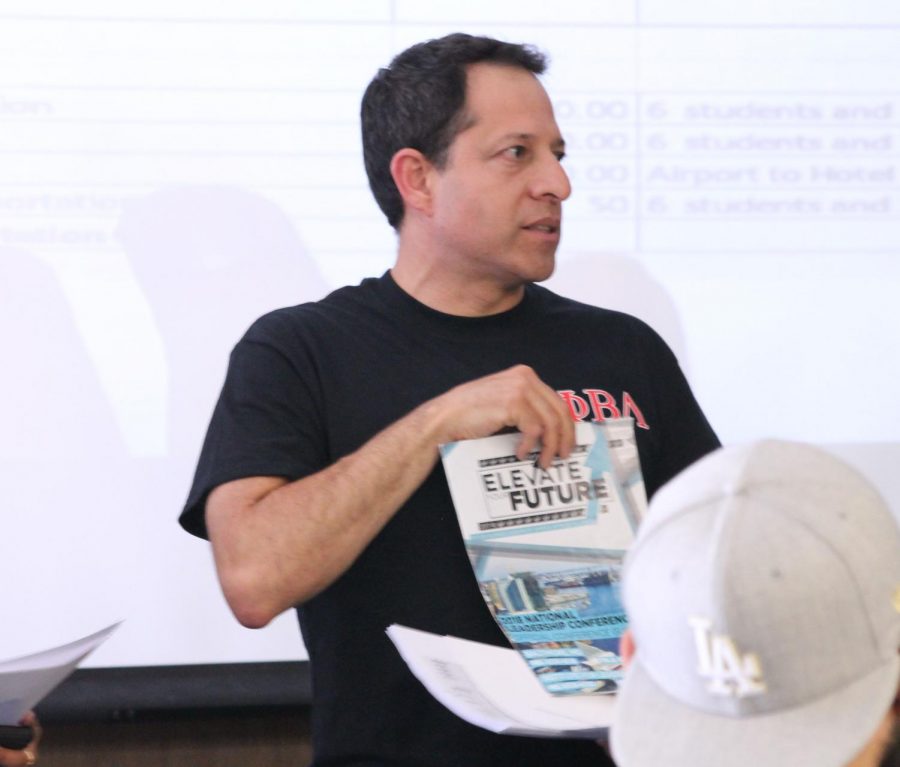 Advisor of the Phi Beta Lamda club, Jerry Ramos, spoke to the Associated Students of Cerritos College Senate asking for funding. He plans to use the funding to attend a leadership connference in May.

Phi Beta Lambda was funded about $7,800 for the 2018 National Leadership Conference May 9 by the Associated Students of Cerritos College.

Down from the initial request of about $11,000, the students of PBL will be funding their own meals, as meal money was not included in the revised legislation.

Majority Leader Graciela Espejo voiced her disappointment on the matter and moved to insert $42 on the meal section.

“I don’t see why we’re being stingy with this money, we should be able to feed them. The reason why they’re able to do so great is because we are feeding them,” said Espejo, “Some of us can’t afford food and this little bit of help… it’s good.”

The motion to fund meals failed, but the students of PBL have taken to fundraising and receiving donations.

“I’m disappointed, because I tried to fund them at least for the meal, but it’s bittersweet.

“Bitter, because I didn’t get the funding that I wanted, but it’s sweet because they took on the responsibility to be like, ‘you know what, you guys want to act like that? Fine, we don’t need that. We can cover that.’ That’s leadership,” Espejo said.

Jerry Ramos, co-adviser of PBL, thought it was kind on Espejo’s part and despite not getting the initial requested funding, expressed his appreciation of the senate.

“It elates me that the… senators, the leaders are doing their best to be prudent with our financial, our limited financial resources and doing their best to fully discuss it in that pros, cons, in-between,” said Ramos, “So, I thought it was a very healthy discussion, and I appreciate that.”

Minority Leader Samuel Jimenez abstained from voting on the legislation.

ASCC Vice President, David Ramirez, said it made sense, “If you’re going to be voting on something that affects you personally… you should abstain.”

“I’m just trying to ensure that, you know, we have an equity amongst [all clubs],” he said.

“I believe the dollars that [ASCC] just allocated now are going to be well spent, invested in six students, one adviser and again, they are going to touch many lives ultimately,” Ramos finished.