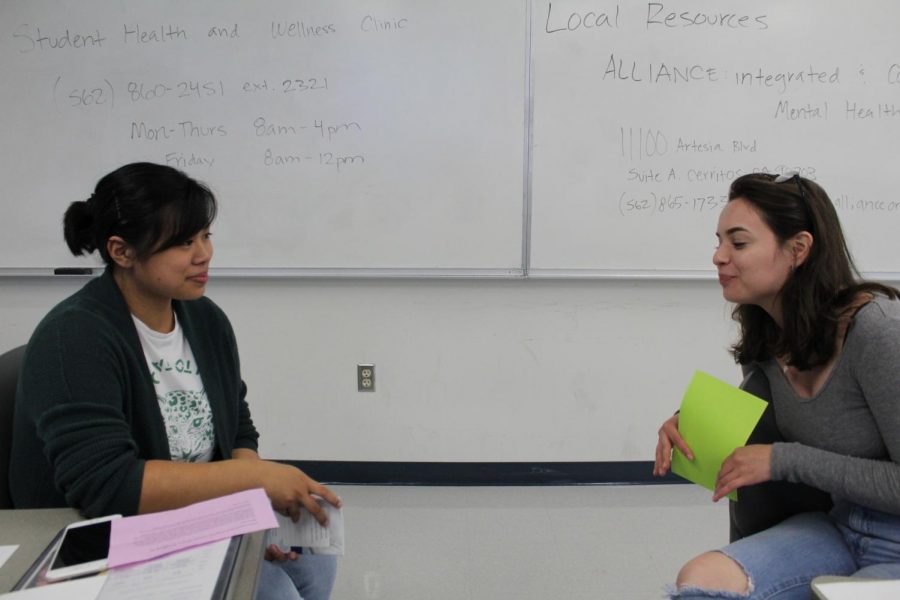 Nursing majors Andrea Lavadia and Vanessa Avery practice bringing about the topic of suicide and incorporating the questioning technique they learned in the workshop. Students practice talking and asking about suicide by reading off scripts.

Due to the topic of the workshop, three Cerritos College Active Minds club members were available for support and to check on those who stepped out of the workshop.

Active Minds is a national nonprofit organization that advocates for student mental health.

Those who stayed for the entire duration of the two-hour long event received a certificate signifying that they are trained in QPR.

QPR are the three steps to prevent someone who may be experiencing or demonstrating the symptoms of suicidal ideation from ultimately dying by suicide.

“The ultimate goal of the workshop is to teach people the warning signs of suicidal ideation and these three basic skills to intervene and really, in my mind,” Fain stated, “it’s also about upping the level of communication that we have between each other and to prevent crisis, ideally, from happening for showing up for our friends and for the people around us.”

Fein also encouraged audience participation by having students act out conversations about suicide, incorporating the QPR method with a partner.

QPR handbooks were passed out during the workshop, while Fein described examples and explained in depth how to effectively: “question a person about suicide, persuade someone to get help and refer someone to the appropriate resource.”

One of the club members available for support was Active Minds President Katherine Callejos, who also coordinated the workshop.

Callejos explained why the event was coordinated, “Over the summer we heard about a lot of suicides within celebrities and while planning out these organizations, we kept thinking like, ‘well what is the most effective thing that we could do for our students? And we thought why not have someone from Active Minds actually come down and give a presentation that is dedicated to suicide prevention.”

Nonprofit organization, the Matthew Silverman Memorial Foundation, funded the event, said Callejos, because the club could not cover the price of the event due to budget costs.

Stephanie Guerrero, anthropology major, thought that the topic presented in the workshop was “very important because this is something that we see a lot in society but people don’t want to talk about it since it’s a really difficult topic to approach and sometimes people want to help but we don’t know how to.”

Fein shared how she thinks talking about suicide prevention and awareness is important for college students, “I think it’s critical for peers to understand how to recognize when their friends and loved ones are struggling because what we see is that vast majority of the time,

“Somebody who is struggling is going to tell their friend before they tell a professional or a family member, so it’s really critical that we know how to respond in a productive way and get them to the help that they need.”

Callejos hopes for a larger QPR workshop in the future.

She stated, “Honestly, I wanted it to be a big event, but then I just realized if it impacts one person then I think we did the job right.

“I think it went well, I think it really helped, I know it helped me, and I just hope that in the future maybe we can have this in an even bigger scale, I think that would be wonderful.”