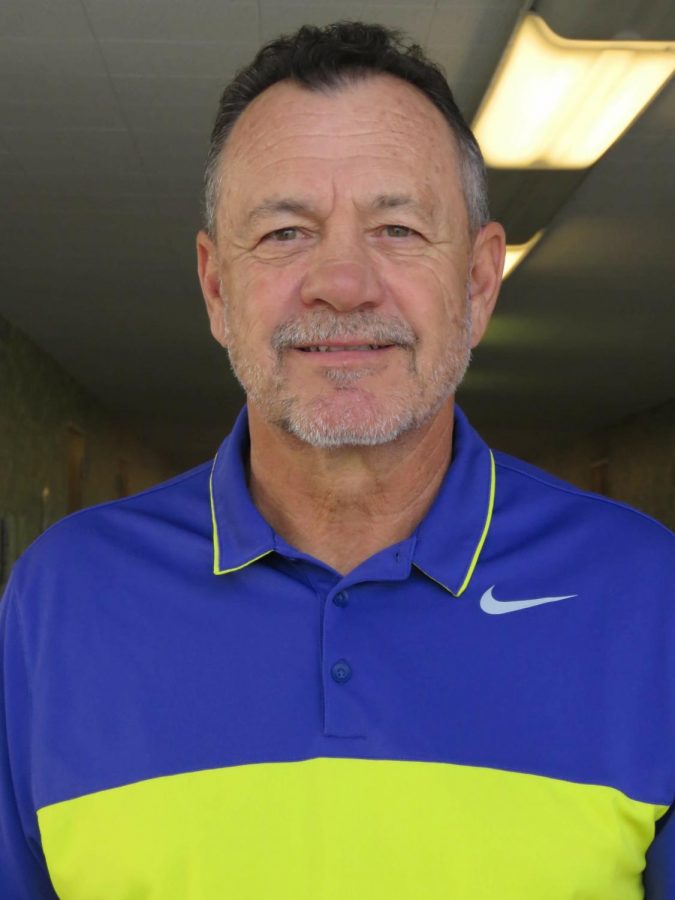 It’s known that teachers, by mentoring youth, can make a difference in a positive way and their advice can make a huge impact for any student to navigate the real world.

Professor Michael “Mike” McPherson has been coaching and mentoring Falcons for the last 30 years, impacting the Cerritos College community in many different ways.

Simply known as Mike or Coach Mike by former students, colleagues and friends; they have said that he has made a noteworthy impact by becoming a mentor and father-figure to many students throughout the years.

While McPherson has accomplished a lot throughout his life, he has come a long way, making him into the person he is today.

In his early years, McPherson contributed to “this great country and to America’s freedom” by serving in the United States Navy during the late seventies.

McPherson is a former Falcon alumni himself. He graduated in 1982 and played in the Cerritos College football team.

During his Falcon years, McPherson met his wife and they have been married for 30 years and remain in contact with many college friends to this day.

He continued to pursue his education by transferring to California State University, Northridge where he knew fellow classmate, singer and television personality, Paula Abdul.

After graduating from university, he became first in his family to graduate with a college degree.

McPherson returned to his alma mater, Cerritos College, not only to be an instructor in the health science department but also to hold the positions of football coach and later as administer.

As an instructor, McPherson recalled his teaching goal for all of his students: “to discover themselves by [knowing] their strengths, weakness and passions.”

McPherson said, “My intent in the classroom is to make a difference in student’s lives.”

As an health science instructor, he made sure his lectures included advice that would help students meet their aspirations. He advised that they take care of their overall health whether it was mental, professional or physical.

He coached the Cerritos College football team for 15 years. He enjoyed his experience as coach by helping the players successfully win football games, going to Super Bowl games and helping student athletes transfer to four-year universities.

He said his favorite task as a coach was recruiting student athletes. McPherson said, “[I] had a chance to promote Cerritos College to new families knowing it could have the same influence on them that the college had on [me].”

His impact as a coach influenced many of his student athletes such as former football player Donny Sams, who graduated in 1997. Sams considers Coach Mike as a “father-figure” to him after Sams’ biological father passed away.

“When I left Cerritos [College], my father passed away [and] Coach Mike took his place,” said Sams.

Coach Mike taught Sams how to “be responsible and to take care of himself.”

After 20 years, Sams still considers his former coach as a father-figure and a big influence in his life to this day.

James Rivera is another former student athlete who owes his success and motivation to coach Mike.

Rivera recalls his time at Cerritos College as him being a “terrible student and immature.”

“He [McPherson] was awesomely patient with me and put me in the right position” said Rivera.

Thanks to his mentor’s motivation, Rivera earned a scholarship to Fresno State University.

As a result of his experience as a coach, he moved position as the Athletic Director on campus.

One of his most significant accomplishments as an administrator was that he coordinated the Pepsi vending agreement in 1999 that resulted in an contract worth $1.5 million. The purpose of the deal was to fund branding for the school and equipment that the campus needed.

It was reported that the agreement was the largest beverage contract in the state and brought statewide recognition to Cerritos College.

Cerritos College and Pepsi then formed a partnership and a fundraising program in which was expanded to all 107 community colleges in California.

He was also the head of the College Bound Program which offers college courses to high school students in nearby communities.

With this impressive resume of accomplishments, Michael “Mike” McPherson will pass on the Falcon legacy for many future students to come.