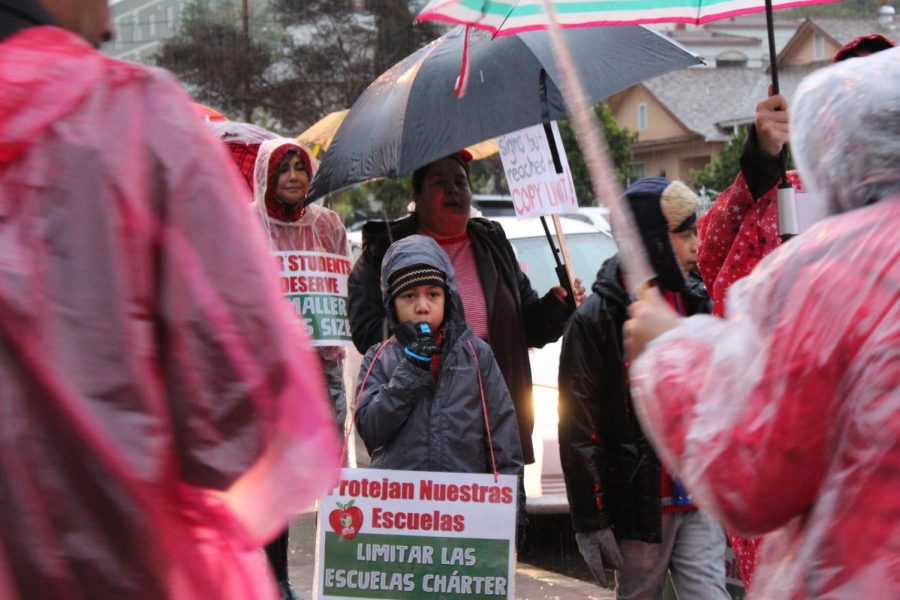 Chants of “Beutner, Beutner you’re no good, treat your students like you should” rang through wind and rain as Los Angeles Unified School District teachers and community members rallied in support of better schools on Jan. 14.

Cold, wet weather did not deter strikers from hours of marching with picket signs in front of Gates Street Elementary School, before making their way to Los Angeles City Hall to join thousands of others in the march for smaller class sizes, increased staff and reduced standardized testing.

Wearing ponchos and drinking hot coffee and champurrado, the strikers eagerly carried on.

Erica Gil, parent and past volunteer at Gates brought her children to strike early morning before heading to work.

“I think if teachers had smaller classes, struggling students will have what they need in terms of attention, in terms of extra help that they can get from the teacher,” Gil said, “When you’re dealing with 30, 40 kids or 25+ kids, it’s very hard to give attention to [children who need that extra help].”

According to the Los Angeles Times, the district lost $15 million on Monday with only about one third of students showing up to classes.

In total, the district has lost about $39.1 million in state funding based on attendance.

Gil plans to keep her sons out of school until the strike is over, but worries about the legalities of truancy. She is committed to keeping them out if she is able to.

“[My mom] said we were going to support the teachers so that we can have better rights,” said Marcos Gil, second grader, “I would feel happy if they did get what they wanted.”

Martin Renteria, third grade teacher at Gates Elementary, was in high school when LAUSD teachers went on strike in 1989 and commented on the repeating cycle.

As an educator himself, he wants to have the best resources to give students a good education.

“Obviously we’re doing it for the kids. I mean for so long, we’ve been working in certain conditions, that we’ve been working or negotiating year by year with the district,” Renteria said, “Even if sometimes things do look better… it’s always about funding and not having enough for us to be… able to teach our kids.”

Renteria took it as his responsibility to inform his students on what a strike is and the purpose behind most of their teachers not being present.

He believes the students also feel like they deserve better.

Not only did Gil come in support of the union’s requests, but to express her personal problems with LAUSD. Her son who is a sixth grader is subject to random searches at Nightingale Middle School.

“[It is] a waste of money and time I believe and why subject them to that, you know?” she said, “It’s totally unfair that they are targeting us [low income communities] and my kid is happy to get a lollipop at the end of the search. As a parent I feel very offended and very upset when I learned that they are doing this to middle school kids.”

Despite having about $2 billion in reserves, district officials have said there is not enough to cover the demands of the union.

Superintendent Austin Beutner said the strike would only hurt students, families and the community.

The union and the district have not come to agreements, with the strike having no clear end date.

“What they’ve offered for one year, you know, we’ll be in the same situation the following year. So, it doesn’t really make any sense,” Renteria said, “I think we’re done with that kind of treatment from the district.”