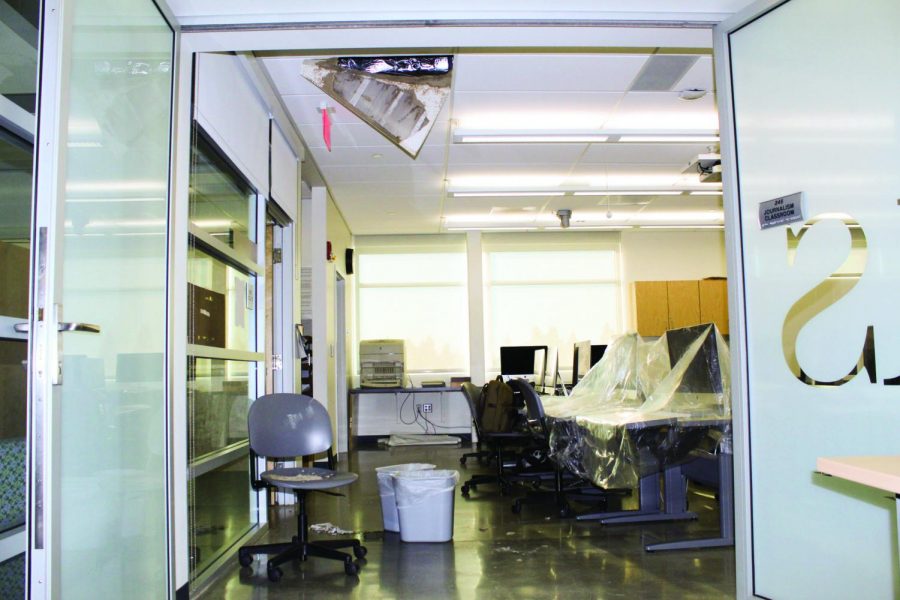 Ceiling panel collapses due to broken boiler leak above the newsroom in the Fine Arts building. Student editors were nearby when the soaked panel crashed on Jan. 25.

A broken boiler caused a leak, forcing a ceiling panel to collapse above the Talon Marks newsroom in the Fine Arts building Jan. 25 while editors were working nearby.

The soaked panel crashed at about 2 p.m., first catching the attention of the newspaper’s photo editor, Derrick Coleman, who had been sitting on an affected chair minutes before.

“I was sitting [at the computer], I was working on something and then I walked to go the printer,” Coleman explained, “By the time I came back, there was already a piece of the [ceiling] on the chair.”

Afterwards, Coleman got the attention of his professors, trying to figure out what went wrong.

About 15 minutes after the incident, the school’s plumber inspected the collapsed panel and decided a broken boiler leak was the cause.

The fallen panels were heavily moist and had a fishy odor and multiple trash bins were placed under the dripping ceiling, as pink-stained water started to create a puddle on the floor.

By the time all editors and staff had left the newsroom at 5 p.m., the situation was left unsolved and unsanitary.

According to the Mass Communication Department, the fallen panels were left untouched until a custodian cleaned it up Jan. 28.

David Moore, director of physical plant and construction services at Cerritos College, said that although these things happen, he acknowledges the unexpectedness of the situation with a new building.

“I am a little surprised that that new building has had some issues in it,” Moore explained, “But Fine Arts is rather complex, so I guess with complexity, comes a potential for problems sometimes.”

With any water damage, Moore knows concerns about mold are bound to surface. However, because the building is fairly new, Moore is confident that mold will not be a problem in the near future.

Moore says he has been supervising buildings for a long time and when things happen, they do the best they can.

As of Jan. 29, multiple ceiling panels have not been fixed in the newsroom, as the new ones have been left sitting outside since Monday.

President of Cerritos College, Jose Fierro, speculates the panels will not be fixed until it is for certain water is not leaking from the ceiling.