Staff in an uproar over accumulating trash 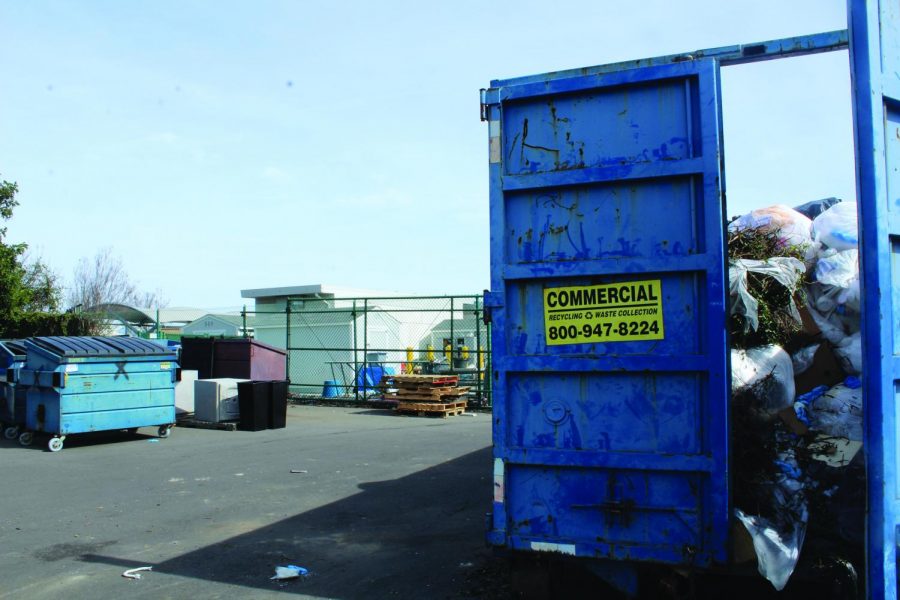 Campus custodian have expressed concern over the new college dumping site location. On Feb. 12, officials said that it is to keep trash "away," but the dumping site is next to the Child Developments Center.

A teacher in the Child Development Center says they and the children have endured pungent smells of trash for weeks while Cerritos College is in the process of getting a new trash compactor.

The location of the trash was moved behind the purchasing facility and near the development center in 2018.

Stacks of cardboard boxes, desks, filing cabinets, trash bins and other items have remained untouched for weeks, getting caught in the recent rain storms.

Items such as the filing cabinets have started to gather rust while miscellaneous mush covers walkways where people throw away trash.

Marlen Murray, child development teacher for 2-year-old toddlers, said any time there is extreme heat or if the wind blows in their general direction, the smell is condensed in an area where lunch tables are located, where the children eat.

“One thing that is worrisome to us as teachers is that it is so close to where the children are eating and, I mean, that’s not good for anybody,” she said, “Nobody wants to be smelling those bad smells when they’re trying to eat.”

Murray knows the children have noticed the smells, recalling her kids yelling out phrases like, “It smells like poop!”

Typically, the company is responsible for picking up the smaller dumpsters, but those bins are currently not being used.

Two bigger dumpsters are almost filled to the brim with the collected trash.

Donnie Hawkins, disposal custodian for Cerritos College, said he was present when the company quit on the college and thought it unexpected and sudden, but out of the college’s control.

“It leaves everybody in a ‘hustle and bustle’ and [custodians are] basically making the best out of nothing,” he said, “Right now we have to go around by hand… we just deal with it.”

According to Director of Physical Plant and Construction Services, David Moore, it was an annual agreement on a regular purchase order, not a contract with the college.

He replied most custodians and managers did not notice when the company initially quit.

Conversely, a few Cerritos College custodians, who wished to remain anonymous, expressed their frustrations and concerns with the situation early on in the spring 2019 semester.

One custodian brought up the possibility of attracting rats and cockroaches if the issue continues for much longer and kept the Child Development Center in mind.

Murray said, “In the beginning when the trash first came over here [near the Child Development Center]… right away, the children started talking about the smells or the [trash being noticable].”

Prior to the trash build up, Murray said the children had a view of the strawberry fields and would love going to the fence to point out what they noticed in the garden.

Now, they notice the trash cans and other items and conclude it’s the trash that causes bad smells.

Murray explained that the consistent smell of trash does not go with what they are trying to provide the students with, which is enjoying outdoor elements and fresh air. Although it is a opportunity to teach children about trash accumulation, she doesn’t want the children to get used to it.

Moore replied via email and said the trash was moved to its current location due to the construction of the Performing Arts Center, which impacted the old pickup location for the trash.

“It’s a better spot away from the public,” he wrote.

“I think it’s easy for [people] to think that it’s not very noticeable because it’s in this back corner, but there’s still people here,” Murray said.

Moore wrote the college is “close to finalizing a new service provider.”