Proposed resolution for a smoke and tobacco free campus 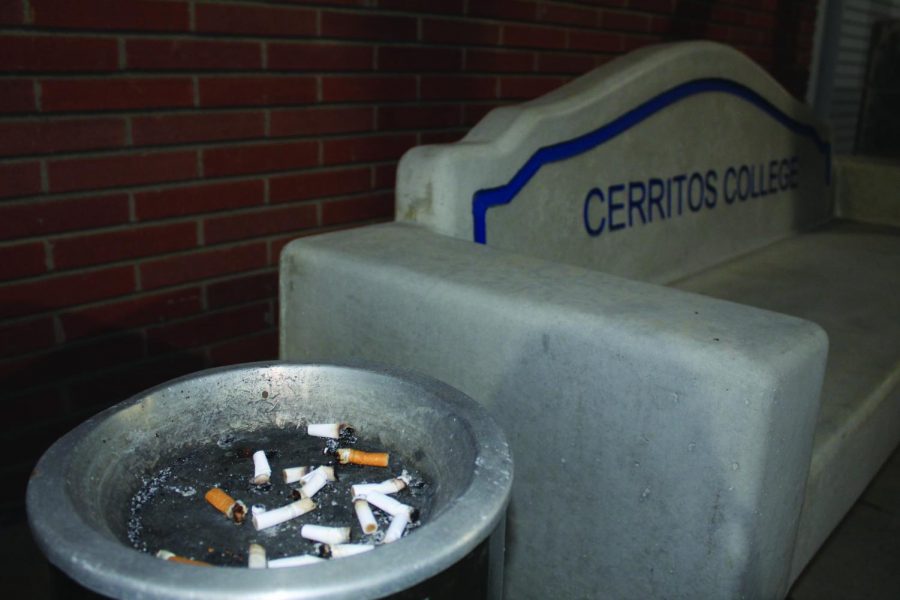 The proposed solution for a smoke-free campus would limit designated smoking areas due to disadvantages and health risks, according to Henry Rios, alcohol and other drugs prevention manager for Norwalk and Hawaiian Gardens. On Feb. 20, the Associated Students of Cerritos College discussed the topic at length.

A 100 percent resolution was proposed for a smoke and tobacco free Cerritos College campus, prohibiting cigarettes, cigars, and nicotine products such as vapes that are not regulated by the FDA, has for a healthier learning environment.

If the resolution passes, students, faculty, staff, etc. will not be able to smoke on campus property, in both indoor and outdoor areas, including parking lots.

The resolution would not include designated smoking areas.

Henry Rios, alcohol and other drugs prevention manager for Norwalk and Hawaiian Gardens, believes designated smoking areas are more disadvantageous,increasing rates of smoking and students relocating to spaces outside of the circle.

According to the California College and University Smoke/Tobacco-Free Policy 2018 Report Card, Cerritos College scored 35 percent, which is mainly due to lack of signage and implemented policies, Rios explained.

Hillary Mennella, from Cerritos College’s student health services, and Rios said they were awarded an almost $70,000 grant in September 2018 and want to use it for a “meaningful, thoughtful campaign” that is educational and changes social norms.

Rios and Mennella emphasized that a student task force would be responsible for dealing with smokers on campus, not law enforcement.

“It’s not like if campus police is trying to track you down and [when] they find you with a cigarette, they’re going to go and tackle you or something. It’s more along the lines of everyone working together, like the student body itself.

“They’re going to people and seeing if they’re smoking in a certain area, asking them if they need resources, if they’re trying to quit, how they feel about it,” Rios said.

Heather Johnson, Associated Students of Cerritos College senator, worries about student smokers feeling unwelcome on campus without designated smoking areas, while being aware of the health risks of smoking.

“It’s in our face everyday, we see it all the time, it’s on commercials, it’s on posters, it’s everywhere we go. We know the truth. We know that this is wrong, we know that this doesn’t work for us, yet there is still people who smoke,” Johnson said, “So what resources would we have that are available… besides ‘quit smoking?’”

She pointed out that nicotine gum and patches do not work for all students.

As a self-described poor African American, Johnson wants to know how these resources will help students like her.

Mennella acknowledged that there are less resources for those students, in general, within communities.

Rios said that students would not be out to get each other, but work together to help student smokers.

Rios and Mennella’s grant expires in 2021 and the two look forward to town hall meetings where people can discuss the topic, a task force consisting of students and faculty, training for student ambassadors and a campaign slogan.