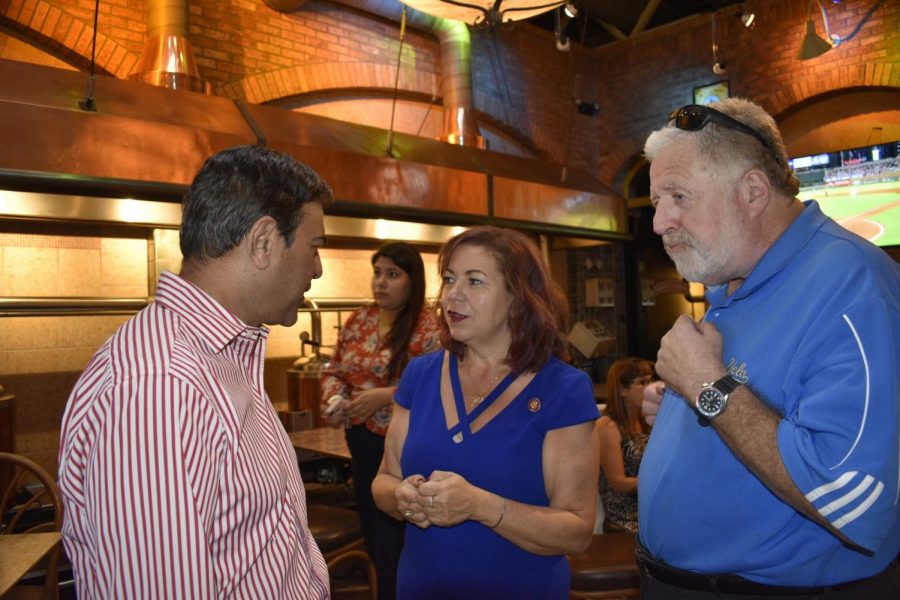 Congresswoman Linda Sanchez kicked off her re-election campaign in Santa Fe Springs on Oct. 3, where residents within the district lined up to sign her nomination forms.

She is the first Latina in history to serve on the Judiciary Committee and the first woman to serve as Chair of the Subcommittee on Commercial and Administrative Law.

ABC Unified School Board President Ernie Nishii said he was there to support Linda Sanchez’s re-election because she represents the “sensible good government.”

“She supports everything we need in our community,” he added.

Kim Coleman, a special education teacher and member of the California Teachers Association, said she was here to support Linda because she has been a leader in education by introducing legislation to combat bullying.

She sits on the powerful House Committee on Ways and Means, which is the chief tax-writing committee in Congress and plays a role in federal legislation on trade, Social Security and Medicare.

Sanchez states her focus in Congress has been on her committee work to pass bipartisan legislation such as The Secure Act, which will help people save for the retirement and give them additional information to prepare Americans [to] save for their future.

When Congress returns in October, the focus will be on passing H.R. 3– a bill to drastically reduce the cost of prescription drugs.

“This will be a game-changer for everyone including those who are privately insured or on Medicare,” Sanchez stated, “We often pay 10 times more for the same prescription drug than other industrialized countries pay and that’s just not fair.”

While in the district, Sanchez has been reaching out to cities in her district on the census 2020 which will be completed online.

Sanchez said, “18 percent of her district does not have access to the internet and will require assistance in completing their forms.

“In Los Angeles County, 1.5 million people went uncounted in the last census, which is the size of two Congressional seats that didn’t receive federal funding for healthcare and education,” Sanchez said.

In the 2018 election, young voters were listed as the second highest voter turnout.

“Young voters more than anybody have a stake in the discussions being made in Washington, so please do your homework and participate in the process.

“Better things will happen if you participate in the process,” Sanchez continued.

Sanchez and her sister Loretta were the first sisters to serve in Congress simultaneously.

Loretta Sanchez, a former labor attorney, is co-founder and co-chair of the Congressional Labor and Working Families Caucus where she works to ensure the safety of workers from industrial accidents and employer retaliation and intimidation.