Pie-in-the-face fundraiser garners over $1,000 for students in need 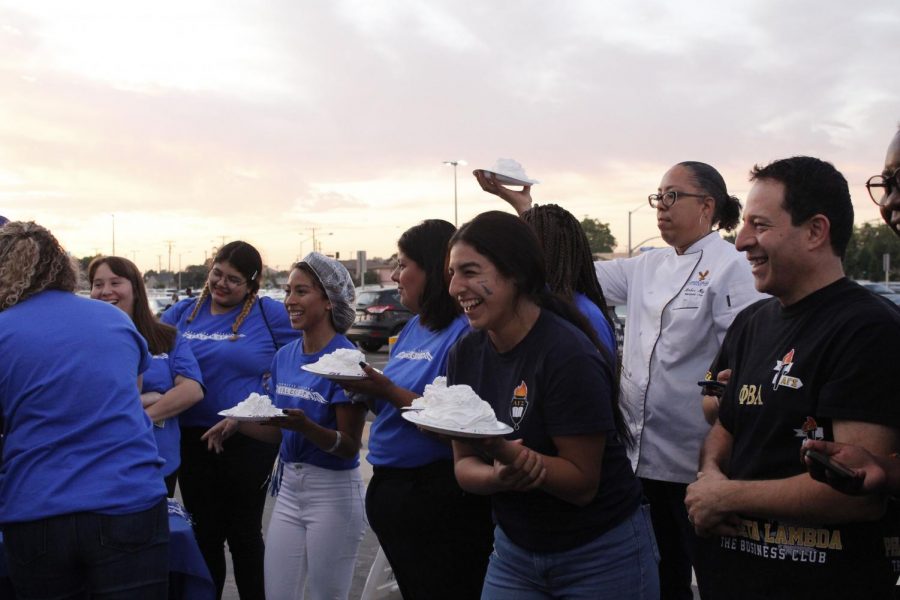 Faculty and staff members anticipate their turn in covering President of Cerritos College Jose Fierro in whip cream, making the most out of the $100 donation. The pie-in-the-face event raised $1,018 total for personal care products on Nov. 2, 2019.

In an effort to raise funds for Domestic Violence Awareness Month and students in need, the Associated Students of Cerritos College hosted a pie-throwing and pie-in-the-face activity during the tailgate event prior to the Homecoming game on Nov. 2, raising $1,018 total for personal care products.

The proceeds will go to helping provide basic needs for students, such as personal hygiene products including soap, conditioner, toothbrushes and more.

The activity was first proposed by Dean of Student Services Elizabeth Miller, having participated in a similar event during a Relay for Life fundraising for people with cancer.

She said the idea was well-received by ASCC during the process of coordinating events for homecoming.

“They were really excited to do it and then it just became funny. We’d joke around like, ‘Oh you’re going to get pie in your face,’” she said humorously, “Really, the student leaders loved [the idea].”

Homecoming pre-game and half-time activities did not include the crowning of a Homecoming Queen, as done in previous years. Hoping to attract a larger turnout, various clubs on campus participated in a tailgating event, having booths set up with food, games and prizes.

Mischevious laughter was evident in the participants donating money to “pie” administrators, faculty and staff alike in the face, repeatedly saying, “It’s for a good cause.”

People could either make $1 donations to “pie from the line,” $5 to press pies directly to the face and/or $100 to pie President of Cerritos College Jose Fierro.

He said he preferred the pies to the face, dodging a pie throw and laughing loudly at the miss. Fierro explained that he did not know what to expect from the pies thrown from the line.

Getting to pie Fierro in the face raised more than $300 alone.

ASCC Vice President Nathan Williams felt like there could have been a greater turnout and has better hopes for next year.

He thinks the new activities are a better way for students to engage on campus as well as allow student leaders to participate more than just observe “even though [they] get pied in the face… multiple times,” he laughed.

“We do need to, I think, improve our just general widespread marketing so more students know about it, too,” said Miller on outreach to students in need.

Designated areas for picking up needed products will be in the Student Health Center and various department offices.